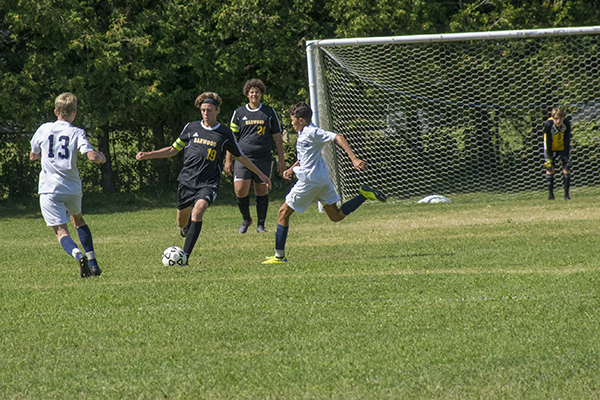 Stowe would get the early jump on the Highlanders, scoring in the first half. Harwood held the Raiders to a 1-0 lead until the second half when Stowe widened the lead, scoring three more goals.

Harwood did have a goal-scoring opportunity on a stroke; senior Anne Fennelly was unsuccessful in the penalty shot.

“The girls did a good job clearing the ball out wide on defense and bringing it up through the alleys. We need to work on finishing in the circle and working between the layers of our opponents to cut and be open to receiving passes,” said head coach Katie Alexander.

When asked how the team’s energy is coming into the last half of the season, Alexander said, “As we enter the second half of our season, the girls still have a high energy level and a strong desire to win games. Even when we are losing, we always play our best throughout the game and do not give up.”

Head coach Ali Lake said her girls did a good job of keeping level heads during the match.

“They didn’t have too many mental highs or mental lows. They stayed focused throughout the whole match. We will be attempting to build a better connection between our setters and hitters. There wasn’t much hitting going on in this match, and we will need this for our future matches,” said Lake.

Lake said the court communication was there in the match, but the team needs to work on creating energy. “Cassie James, our libero, is working on establishing herself as an asset on the court by becoming more verbal. In doing this, she will be able to free up her teammates to focus more on other things, like hitting,” said Lake.

Coach Lake said, “It just was not our day. The girls were attempting to be aggressive, but just couldn’t find the court. Ball after ball was hit out of bounds. We want to maintain that aggressive mentality, but we need to find the court first. The focus of practice this week will be building confidence and trust between our setters and hitters. I hope to see that aggressive mentality again against our competition this week but I would like to see a more controlled version.”

Harwood boys’ varsity hosted Lake Region (LR) on September 27 in a game that had the Highlanders squeak by with a win.

Harwood came out early as Finn O’ Hara scored in the first three minutes of the game from an assist by Cole Hill. Harwood was able to keep Lake Region at a goose egg until the final minutes of regulation played out. Harwood goaltender Ollie Hammond made five saves. Lake Region goalkeeper made 11.

Head coach Joe Yalicki said, “We did a good job of possessing in our defensive half of the field despite LR pressing pretty well as a team. We did make some mistakes, but we made good adjustments at the half to make it easier for us. Generating scoring chances when the game slows down has been a hard thing for us all year, and this game was no different. We have the speed and athleticism to create chances in the transition however.”

Varsity girls’ soccer traveled to Stowe on September 25 in a game that would see the Highlanders return home victorious.

Harwood’s Tanum Nelson, Tela Haskell, Rubi Murphy and Louisa Thomsen all notched one in for the Highlanders.

In a shutout game, Harwood hosted Lake Region on September 28 in what would be a runaway game for the Highlanders.

When asked how his team keeps up the momentum as the season draws closer to the final chapter, Vasseur said, “We really want to be the best team we can be and head into playoffs playing well and having fun.”