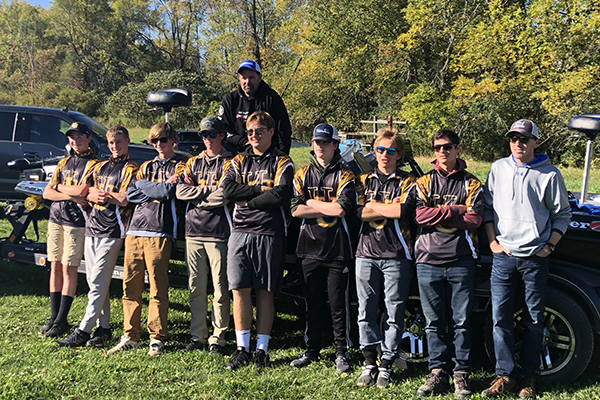 The Harwood Union varsity field hockey team played against Stowe on September 26. Stowe was able to hold off Harwood for a 4-0 victory.

“The girls did a good job clearing the ball out wide on defense and bringing it up through the alleys. We need to work on finishing in the circle and working between the layers of our opponents to cut and be open to receiving passes,” said head coach Katie Alexander.

The first goal was scored by Abby Scharges with one minute remaining in the first half. Missisquoi quickly regained composure, scoring two goals in the first five minutes of the second half. Harwood was able to net one 10 minutes into the second by Anna Kudriavetz, and Rachel Goodwin scored minutes later to seal the win.

On October 8, Harwood traveled to face Lyndon in a close game that would have Harwood sneak by with a one-goal win.

The lone goal was scored by Claire McGeorge in the second half. Harwood had three shots on goal, five offensive corners, 12 saves, and 11 defensive corners, testing the defense’s durability to get the ball out of the circle.

“There was a lot of back-and-forth play between the 25s in the first half of the game. In the second half, we were able to score on an offensive corner. After that goal, we spent a lot of time back on defense, but our defenders and goalie Kaylee did an awesome job working together in the circle to keep Lyndon from scoring,” said head coach Katie Alexander.

Boys’ soccer played on the road against Lamoille on October 2 and Harwood walked off with a 4-0 shutout. Finn O’Hara scored from a pass from captain Hayden Adams. Jordan Shullenberger scored assisted by Adams minutes before the half. O’Hara found the back of the net again from a pass from Gavin Thomsen, and to wrap it up, freshman Cole Hill scored on a pass from Chris James. Ezra Samuel played keeper and had three saves.

Harwood achieved another shutout against Lyndon on Saturday, October 5. Hayden Adams scored from an assist from Finn O’Hara, followed by Gavin Thomsen, unassisted with 18 minutes to go first half.

Jordan Shullenberger got the first goal in the opening minutes of the game unassisted. Harwood wouldn’t score again until the second when O’Hara scored on a pass from Adams. Adams would get his own goal unassisted after a cornered ball bounced off a Thetford defender into the net. Ollie Hammond had five saves, including a huge save 0.40 second in the game.

“We did a good job of getting balls in past their back line. We played a lot of good balls across too,” said head coach Joe Yalicki.

The event was located at the John Guilmette launch in South Hero (Lake Champlain) where the teams were limited to the Inland Sea area of the lake. Fifteen other teams around the state participated.

Leading up to the championship, the team practiced three times a week regularly. “Monday was a classroom-style practice where we looked at presentations and information about fishing, the science behind it and techniques. Tuesday we tried to get the boys outside to practice casting and we even got them fishing on a local pond to catch some fish. Saturday we got the team out on Lake Champlain on both Scott Green’s and my boat. We practiced all the aspects that go into tournament bass fishing to make the boys well-rounded anglers that have the know how to work effectively in tournaments,” said a co-coach for the team, Adam Lamson.

“Scott and I really wanted to work with the next generation of tournament anglers. This sport has given us both a lot and we want to give back by teaching it to others. Furthermore, high school bass fishing is a rapidly growing sport that is going to be around for a long time. Setting up Harwood with a team felt like the right thing to do,” said Lamson.

Lamson said he enjoys that each student brings a different skill and point of view. Everyone on his team loves fishing, and mixing different personalities and styles makes for a fun experience. “It has really refreshed my sense of what it means to become an up-and-coming fisherman, and I've enjoyed every minute teaching the guys,” said Lamson.

“This was a breakthrough game for the girls. They had been lacking energy and passion in our last few matches, but they really sprang to action against MVCS. MVCS gave us an exciting and challenging match and the girls really had to work as a unit in this battle to come out with a win. Kate McCracken, senior captain, really took charge and led the team to victory. She was all over the court, her communication was at an all-time high, and she really shined as an aggressive outside hitter,” said head coach Ali Lake.

“Cassie James, junior libero, really set the tempo for the match. Her passes were on point all night. She slowed things down on our side of the court so that our hitters could really focus on producing aggressive swings,” said Lake. Lake added that junior Lynn Russell was played well. “She was asked to set for us last minute and she took it in stride. The setter is a very difficult and high-pressure position to fill and she truly gave it her all,” said Lake.

Harwood’s Louisa Thomsen scored two goals for the Highlanders, and Emma Ravelin and Tela Haskell both tallied one goal.

“I thought we moved the ball well and attacked using better angles with our passes,” said head coach Mike Vasseur.

Harwood teed off at the Country Club of Vermont on September 25. Harwood would have Jacob Green with 43 on the day earn a medal. The overall team score had Harwood with the lowest, scoring a combined 196 over U-32’s 227 and Lamoille’s 251. Harwood’s golfers’ scores were as follows: Jacob Green, 43; Jack Lansky, 45; Jon O'Brien, 52; and Liam Guyette, 56.