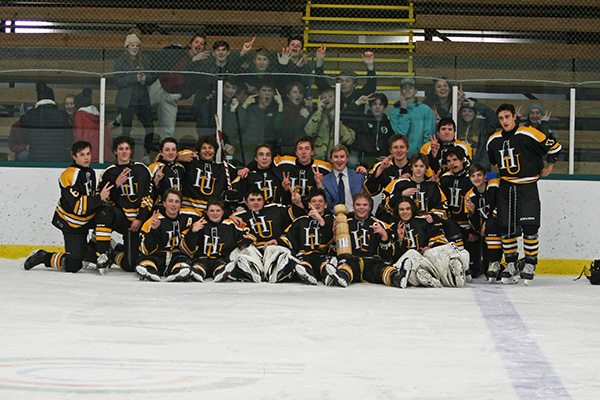 “I’m very proud of them. There were times that the significantly bigger Hartford team made runs, and the boys continually showed what they were made of and pushed back to hold onto the lead,” said coach Jay Bellows, who emphasized that all players had some outstanding plays.

“Sawyer Simmons hit a couple of big threes for us. Michael Fuller played very tough and was a vocal leader throughout the game. Ezra Samuel played incredibly strong with several hard drives to the basket and tough weak-side rebounds and put backs. Cole Hill, a freshman, dropped seven big points in the fourth quarter to help secure the win. The bench was incredible, always backing the players on the floor and adding to the team victory,” he added.

This victory was not an easy one: The team attained the victory with an incredible effort.

“The defense was very tough and didn’t let up many easy baskets as they pressured for the entire game,” said Bellows. “This team is working very hard, with a very short time to start the season, to learn an entirely new system. Their hard work really showed in this first game and they certainly brought the intensity. We look to build on this and continue to learn the system and get better every day.”