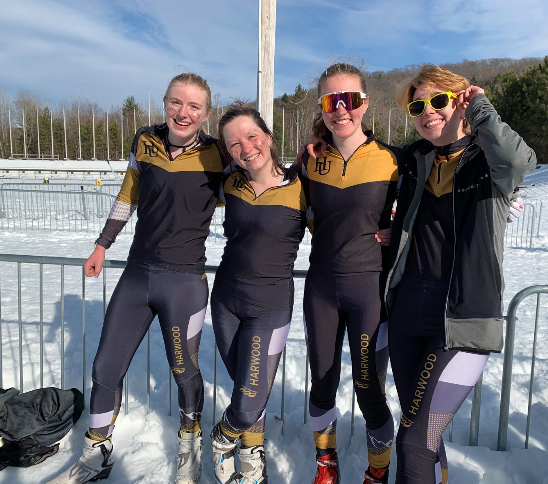 The Harwood Nordic ski team traveled to Middlebury’s Rikert Ski Center on Thursday, February 20, and the Ethan Allen Range on Monday, February 24, to compete in a two-event state championship. Harwood’s Ava Thurston was crowned the state champion in both events, classic and freestyle. The girls’ team won fourth place overall in Division 2. The boys finished seventh overall in Division 2, with Harwood’s Carlton Cummiskey skiing to a 15th place in the classic and 19th for the freestyle.

“On the first day at Rikert, the girls won the afternoon relay event with an unbelievable come-from-behind 2.5K sprint from Ava Thurston. Tagged while 47 seconds behind the eventual second-place team, Thurston closed the gap to win by 14 seconds. The result brought the Harwood crowd to a frenzy! Something that hasn’t been seen in some time,” said coach Tom Strasser.

At the Ethan Allen Range, Thurston placed first in the girls’ individual freestyle event. Her time was not only the fastest girls’ time for Division 1 and 2 but the fastest of all the boys for all divisions as well. Her 5K time that day was 13:59, one second faster than U32’s Jed Kurts.