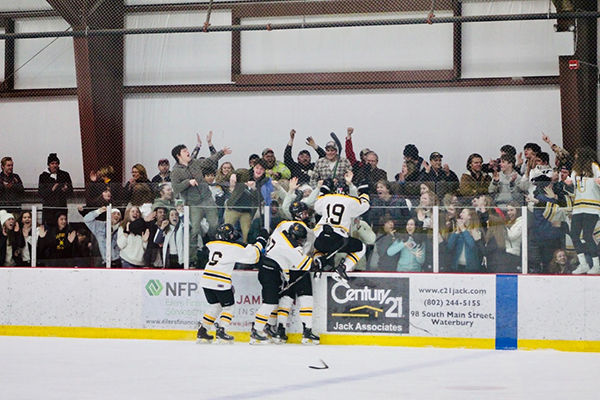 Fans dressed in white on Tuesday, March 3, to show their support for the Harwood boys’ hockey team, who played against Missisquoi that evening. It was a home game and the stands were full of locals, cheering on their boys.

As the crowd grew larger and larger, the scoreboard during the first period remained 0-0. This was met with frustration from the crowd. In the second period those frustrations were swept away when Finn O’Hara, No. 25, scored with less than three minutes left. Cheers filled the stands as jubilant fans showed their support. Tensions rose when Missisquoi scored in the third period, tying up the score, changing the atmosphere in the crowd.

On the edge of their seats the crowd chanted, “One, two, HU!” hoping to give the players the encouragement they needed to score again. Suddenly, O’Hara slammed the puck into the net yet again, with only 18.9 seconds to spare in the third period. The roar of the supporters echoed throughout the rink as the players swarmed around their goalie.

“It was a shaky game for sure. I mean, MVU, last game they beat St. J 7-2 so we knew that they were going to come out battling. Yeah, no, they got a lot of heart for, you know, showing up the way they did,” said Jacob Grout, Harwood hockey coach.

“You put a lot of pressure on your core guys and the core guys came through tonight. Liam Guyette played huge and defense played big. Skyler (Platt), Finn (O’Hara), you can’t say enough about those guys,” he added.

Grout said that being the No. 1 seed going into playoffs had little effect on him in terms of confidence about winning. Missisquoi was seeded eighth and it was a close game. Asked if the cut on his chin was worth it, O’Hara said, “Yeah, it came in the last 30 seconds. We got a goal off of it. At this point I don’t care. We’re on to the next round. That’s all that matters!”