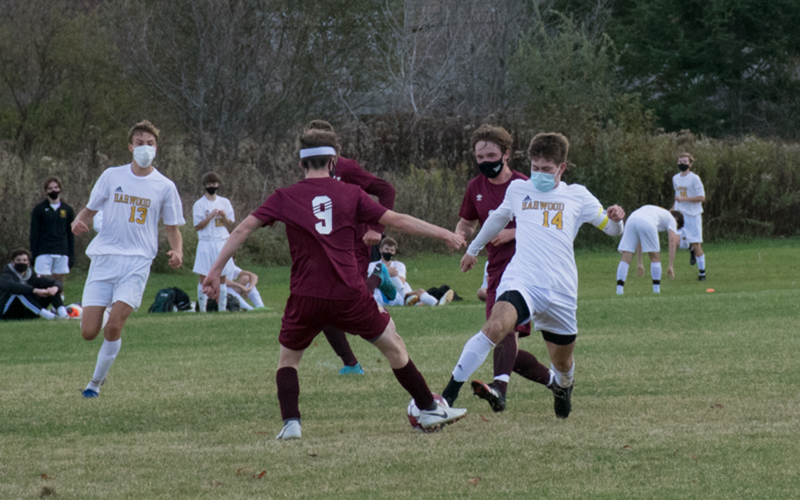 The Harwood boys’ varsity soccer team put in another strong performance Saturday, October 3, beating Lyndon Institute 3-0 at Forrest Field in Lyndon with goals from Hayden Adams, Skyler Platt and Finn O’Hara. The Highlanders had 26 shots, 15 on goal, and a strong defensive showing allowing only one shot for their keeper to handle.

Harwood controlled possession with solid performances from both midfield and defense allowing their offensive threats multiple opportunities to attack the Viking goal. Moving the ball through Jack Birmingham in midfield and Jasper Koliba at defense, Harwood was effective at switching fields and keeping Lyndon on their heels while exploiting openings down both wings.

“Jack had tons of space today and he was a great pivot player helping the ball from sideline to sideline. He, Jasper and Chris (James) will usually have a lot of space, so it comes down to decision making and execution.” said Harwood coach Joe Yalicki.

Harwood forward Adams was especially effective on the left wing in the first half using his speed to turn the corner on the Lyndon defense numerous times creating crosses and shooting opportunities.

Harwood’s first goal came in the second minute from Adams down the left side who used his speed to get past Lyndon right-back Colin McDiarmid. Turning the corner and driving into the 6-yard box where a low-driven shot from a tight angle beat a diving Viking goalie to find the net on the far side goal.

“He's on the short list of players statewide that can create goals like that. We have game plans and team tactics that we try, but he can essentially just do his own thing and score at any moment,” said Yalicki. Adding, “He’s a very gifted player, and we will rely on him to do things like that this year.”

Harwood kept the pressure up driving into the Lyndon box over and over. To their credit the Lyndon defense and keeper, Nick Matteis, held Harwood at bay until the 17th minute when a cross into the box was taken by a leaping Gavin Thomsen who flicked the ball past the outstretched Viking keeper where Platt was waiting to drive a header into the back of the net for Harwood’s second goal.

A potential third Harwood goal from an Adams pass to Nicolas Moran who calmly slotted the ball into the net was called back for offsides.

Harwood continued to apply pressure through the first-half asking questions of the Lyndon defense. Near the end of the first half Viking keeper Matteis left the game after a collision with a sprinting Adams which garnered the Harwood forward a yellow card.

Adams was sprinting with Lyndon’s Diosan Perez chasing down a pass over the Viking defense and Matteis came out and collected the ball. Adams was unable to pull out, getting sandwiched between Perez and Matteis who took the brunt of the challenge.

Harwood came out with more pressure and possession in the second half.

The Viking defense was able to hold off a dozen or so Harwood attempts before finally allowing Harwood’s third goal in the 62nd minute from O’Hara. A bouncing cross in front of the Viking goal had Lyndon’s defense scrambling leaving just enough room for O’Hara to beat Lyndon’s Theodore Levine to the ball, going to ground in a scrum of bodies with the ball eventually going in for Harwood’s final goal of the day.

“It seemed like the play was over and yet there he is still working even from the ground. He has in incredible motor, something every player should aspire for.” said Yalicki.

Harwood controlled the remainder of the game allowing only a handful of Viking forays into their end of the field with only one save necessary from Harwood’s goalie Dylan Mauro who was filling in for the starter Jake Collier who was out for the game on a red card. Collier should be back in goal Tuesday against Thetford Academy.

Yalicki had this to say about Tuesday’s matchup with Thetford, “They are well coached and play good soccer. They are not going to be afraid of us. The difference in our field sizes is quite notable so we should have an edge there. Hopefully we can take a couple of the learning opportunities from the first games and apply them here.”

The Highlanders have a 4 p.m. start time for their home match on Tuesday, October 6.