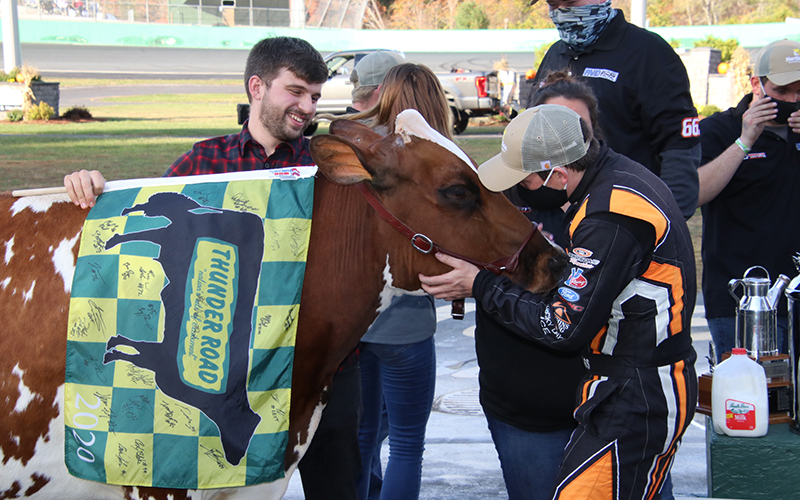 Corliss became only the fourth driver to win the Milk Bowl three times in a four-year span after previously triumphing in 2017 and 2018. Corliss also is the first driver since 2004 to be the “King of the Road” and the Milk Bowl champion in the same year.

After taking the segment one green flag in fourth, Corliss sliced past his competition, going around the outside of 2019 Milk Bowl winner Bobby Therrien on lap 13. Corliss and Therrien drove away from the field before the second caution for Brendan Moodie’s spin on lap 33.

The biggest challenge for Corliss in the segment came after Therrien and Donahue tangled racing for second with four laps to go, earning both a spot at the rear of the pack. Shelburne’s Trampas Demers got the jump on the initial restart, but Corliss powered back past him with two laps to get the segment win.

Corliss survived a major scare early in segment two. Entered turn two on the 10th circuit, Alby Ovitt and Andy Hill got together mid-pack, sending Hill hard into the outside wall. With nowhere to go, several other top-10 finishers piled in and sustained major damage. Partway through the yellow, Corliss was forced to pit as well due to rear-end damage, putting him at the back for the restart.

However, he showed just why he’s the track champion, flying back through the field. Corliss was up to eighth in the segment when he dodged another bullet, with Scott Dragon flying into the turn one tire barrier right in front of him on lap 31. After another incident on lap 36, Corliss continued his march, taking fourth from Cody Blake on the final lap -- which turned into a third-place after apparent segment two winner Bobby Therrien was disqualified for being too low.

Corliss entered the final segment with four total points, six ahead of a tie for second between Demers and polesitter Ryan Kuhn. He steadily picked his way through the field and was already in front of both challengers by halfway. Then on lap 26, something broke on Kuhn’s left front exiting turn four, sending the East Bridgewater, MA, racer hard into the turn-one wall and putting him on his roof. Kuhn was not injured in the incident.

Barre’s Blake appeared to have won a tiebreaker with Demers for second overall. However, Blake was subsequently disqualified for a suspension infraction. Demers placed second with segment finishes of second, eighth and seventh. Dragon inherited the third position overall for a remarkable comeback after his segment two mishap.

Colchester’s Sam Caron ended the season with his second win of the year in the Lenny’s Shoe & Apparel Flying Tigers Mini Milk Bowl. Caron won the first 40-lap segment on Saturday, putting him shotgun on the 26-car starting field for Sunday’s segment two.

After dodging a lap-16 incident that collected Stephen Martin and Kasey Beattie, Caron followed Barre’s Cameron Ouellette and Waterbury Center’s Jason Woodard through the field. By the checkered flag, Caron has motored his way to sixth in the segment, giving him the overall win with seven total points.

The trio was running together in fifth through seventh with five laps to go in Sunday’s segment two when Fisher tried a three-wide move in turn four. The bold attempt resulted in contact with Woodard and sent Fisher spinning for the second time in the race.

Martin then made his move, getting the second spot on the track with two to go. Coming to the white flag, Michael Gay and Scott Weston got together racing for third, and the chain reaction ended with Josh Lovely on his door in turn two. The red flag came out, and by rule, the second-segment finish reverted to how the field was running at the completion of lap 24. Martin’s two runner-up finishes on the weekend gave him the win with four total points.

St. Johnsbury’s Colby Bourgeois was utterly perfect on his way to the 7-Eleven Dwarf Car Mini Milk Bowl win. Bourgeois sat on the pole by random draw and went flag-to-flag to win the first 20-lap segment.

The second segment was more of the same. Bourgeois cut through the field like a hot knife through butter. He was already up to fourth when the segment’s only caution came out on lap four when Tim Sherman Jr. went for a spin. Just a few circuits later, Bourgeois grabbed the lead and never looked back. It was his sixth total win of the year after five victories at New Hampshire’s White Mountain Motorsports Park.

The Thunder Road racing season is now complete. The first annual Thunder Road swap meet is scheduled for Saturday, October 24, at the track. More information will be released shortly on whether a banquet of champions will be held based on state health and safety requirements.

The American-Canadian Tour (ACT) Late Models and Flying Tigers each have one final event of the year at Maine’s Oxford Plains Speedway on Saturday, October 17. The ACT Late Model Tour crowns its 2020 champion in a 150-lap event while the Flying Tigers go 75 laps in the second annual Oxford Open. They join the Pro All Stars Series (PASS) Super Late Models, PASS Modifieds, and Honey Badger Bar & Grill Street Stock Series with a 1 p.m. post time.

For more information, contact the Thunder Road offices at (802) 244-6963, This email address is being protected from spambots. You need JavaScript enabled to view it., or visit www.thunderroadvt.com or www.acttour.com. You can also get updates on Facebook and Twitter at @ThunderRoadVT.