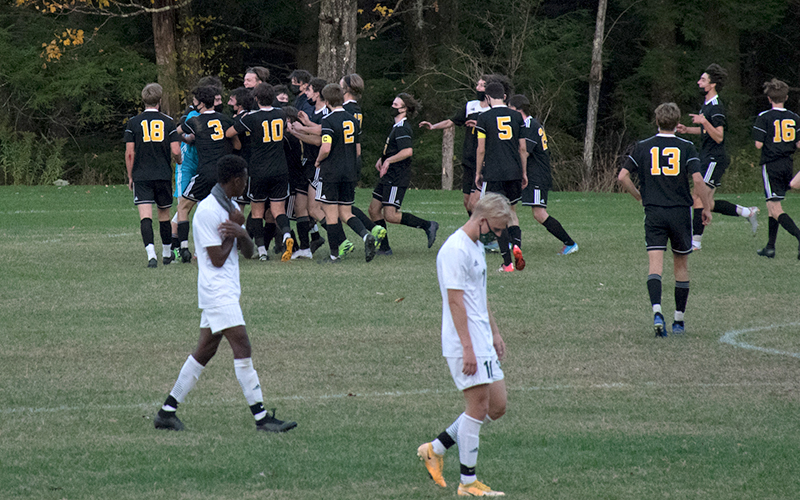 An early goal from senior Gavin Thomsen and some inspired goalkeeping from Jake Collier lifted Harwood to a 1-0 home win over Montpelier on Thursday, October 15, pushing the Highlander record to 5 and 1 with four shutouts.

Harwood jumped to a first-minute lead on a long-distance shot from Thomsen from well outside the 18-yard box. The ball knuckled off Thomsen’s foot and took a strange hop over the outstretched hands of Montpelier goalie Max Weinstein.

The game soon settled into a back and forth battle as each side looked for an opening to capitalize upon. As the first half progressed, it was apparent that this was not going to be a high-scoring affaire. Every pass was challenged and every opportunity was hard earned.

“It was a complete 80 minutes from everyone,” said Harwood coach Joe Yalicki. “We were really locked in and I was impressed with decision-making when winning 50/50 balls and trying to keep possession. We were on edge, but playing poised which is a great accomplishment.”

Near the end of the first half Montpelier found an opportunity with a breakaway through the Harwood defense. But former Montpelier goalie, now playing for Harwood, Collier charged out of his box and made a strong play to clear the ball. Collier seemed inspired by the occasion of playing against his former team and younger brother, Ben, and was soon again called upon scooping up a ball in the box inches ahead of an onrushing Montpelier player, spinning the ball behind his back like a basketball guard.

Instead of settling into a defensive posture to hold their lead, Harwood pressed Montpelier and looked for opportunities to counter. One of those opportunities came midway through the second with a pass to forward Hayden Adams who confidently took on Montpelier defender Shea Brecken and goalie Weinstein putting the ball into the net, only to have it called back for offsides.

Montpelier had some good opportunities to even things up as the game wound down but strong play from Collier and individual matchups all over the field allowed Harwood to hold on for the win.

Yalicki, who with Montpelier coach Eric Bagley, coach for Capital soccer during the club season, has coached and watched many of the players from both teams grow up on the pitch.

“Almost all of those kids have played against, and also with, each other before. Today they matched up and played hard all game long,” said Yalicki. “That was just a fun game to be a part of and I was impressed by every player involved.”

Yalicki said he wants his team to take pride in how they battled Thursday to use that feeling to improve for Saturday’s game. Harwood travels to North Country for an 11 a.m. Saturday matchup.