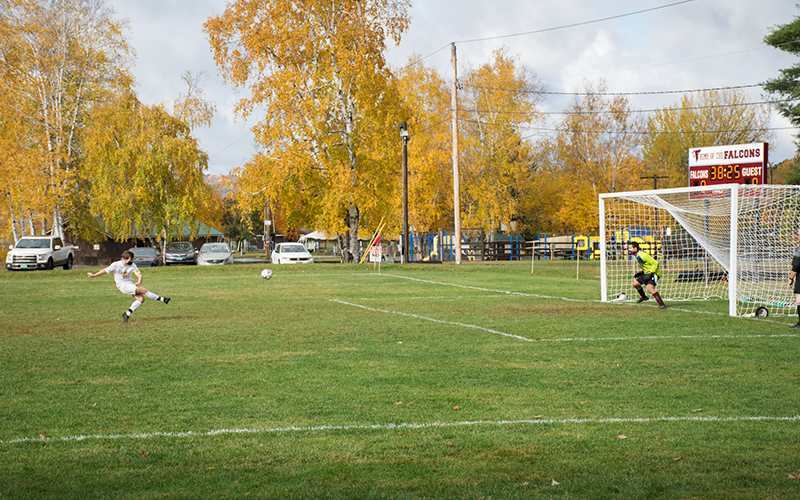 Harwood boys’ soccer traveled to Newport on Saturday, October 17, to face North Country Union High School. An early penalty goal from Hayden Adams, a second-half goal from Finn O’Hara and a solid performance from goalie Jake Collier and the Harwood defense secured the 2-1 away win for the Highlanders.

In the first minute-and-a-half of the game, Adams converted on a penalty kick after O’Hara was fouled racing into the North Country box.

After that initial goal North Country quickly regrouped and the game settled into a battle for every ball and yard of the pitch. Harwood pressed to find spaces to break into, but the North Country defense held their lines and closed down the Harwood offense.

Harwood looked a bit shaky in the Newport sunshine after a hard-fought win against Montpelier on Thursday and a two-hour early bus ride north. Too many slips and slides and whiffed kicks gave the Falcons more opportunities than the Highlanders would have liked.

“I had a feeling the game would be sloppier than usual for us,” said Harwood coach Joe Yalicki.  “Fortunately, we got the ball in the back of the net twice.”

As the second half got underway a stiff wind off Lake Memphremagog picked up adding to the texture of the day.

Ten minutes into the second half Harwood got their insurance goal. A long pass from Adams caught the wind and carried past the North Country defense where O’Hara caught up to it while being challenged hard by NC defenders and goalie Travis Pepin. O’Hara, defenders and goalie all met up as the ball came down. O’Hara went to ground and the NC defender’s momentum took them past the play. O’Hara quickly got up, slid to his left past the North Country keeper and sent home the go-ahead goal.

“He made both of them overcommit at the same time, kept possession and tucked away a goal that the keeper had no chance to stop,” said Yalicki praising O’Hara’s efforts. “There's a very small handful of players out there that could have scored that goal.”

Never giving up, North Country battled Harwood for every ball and put the Highlander defense under pressure. Looking like they had their opening North Country drove a shot that Collier had to block over the top of the goal. Sensing an opening NC almost had their goal off the corner kick. Collier went up for the ball as NC player headed it down past his feet only to find Harwood defenders Morgan Frank and Bryn White on the goal line for the save.

“Jake made a couple awesome saves and smothers off of his line, and the back line in front of him grinded through a tough game,” said Yalicki.

North Country’s Amos Willey got the Falcons on the board in the 86th minute off another corner kick. NC pushed hard to find an equalizer but Harwood held on for the win sending their record to 6 and 1 and putting them in second place in the Vermont Principal’s Association rankings (https://vpaonline.org/athletics/sports-rankings/) .

Harwood will have until Tuesday to regroup and prepare as they host No. 3 ranked and defending champions, Stowe, at home with a 4 p.m. scheduled start time.

“Stowe is the champs. Until some other team holds the trophy at the end of the year you have to treat them like that,” said Yalicki, adding. “But like every game, it's about what we can do … Given the matchup, it will feel like a playoff game.”