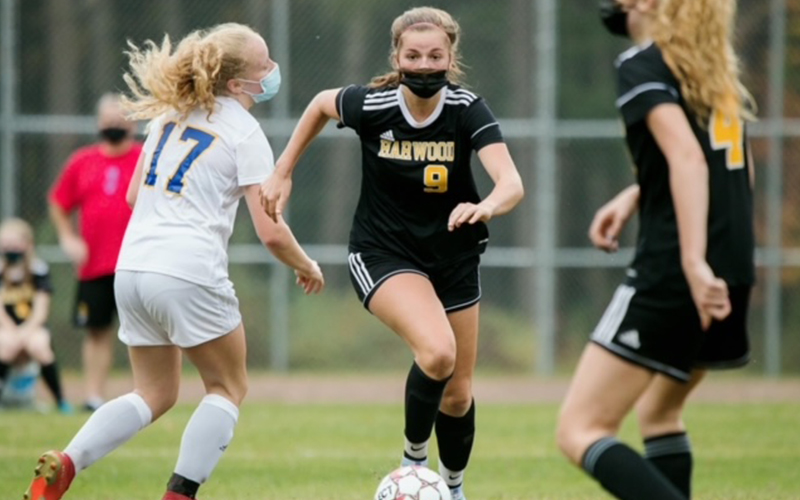 On October 16, the Harwood girls’ varsity soccer team played North Country, dominating their opponents with a 6-1 win. “Both teams came onto the field with aggression, yet Harwood's skill dominated on the field,” said team manager Ellett Merriman.

The win against North Country brought the Harwood girls’ team to the top spot in the state’s D2 division. Harwood’s Tanum Nelson scored a shot in the net in the first five minutes of the game with an assist by her sister, Quinn Nelson. Nelson also scored Harwood's second goal 22 minutes into the game.

North Country squeezed in a goal 28 minutes into the first half through a free kick by Cora Nadeau. “That didn't faze the Harwood team at all,” said Merriman about North Country’s goal.  “They continued to play hard and win the ball.”

Harwood’s third goal was shot eight minutes to half time by Louisa Thomsen with an assist from Ashley Proteau. Tanum Nelson scored again for the fourth goal within minutes of Thomsen’s goal.

With a 4-1 score at the start of the second half, Thomsen stormed the net again, scoring within the first five minutes. The final goal did not come from a Harwood player. It was an own goal from North Country that happened when Harwood’s Katie Rush's free kick bounced off North Country’s goalie and into the goal. “It was a phenomenal game from the defensive line. The rain didn't stop them from going hard to the ball and finding feet,” said Merriman. “Both Poppy Woods and Sarah Bartolomei made some beautiful saves in goal.”

On October 19, the girls played and defeated Thetford in a 2-1 victory in double overtime. “The ladies were keeping the ball on the opposite half for almost all of the game,” said Merriman. Thetford’s Emi Vaughan scored first. “Harwood didn't let this define how they played and scored with only four minutes left in the second half off a free kick taken by Tanum Nelson,” reported Merriman.

In overtime, Harwood kept the ball on Thetford's half of the field. “Tessa Jernigan, a freshman, played extremely well this game with amazing through balls as well as passes. She was also quite speedy up and down the field. She set up for some beautiful shots on goal, just short of rolling in. The team didn't give up when they went into double overtime. They continued to keep the ball on Thetford's side of the field,” said Merriman, who recounted Harwood player Tanum Nelson saying before second overtime: "I'm not tying this game.”

In the last two minutes of the game, Tanum Nelson scored with an assist from Emma Ravelin leaving the score Harwood 2 and Thetford 1.