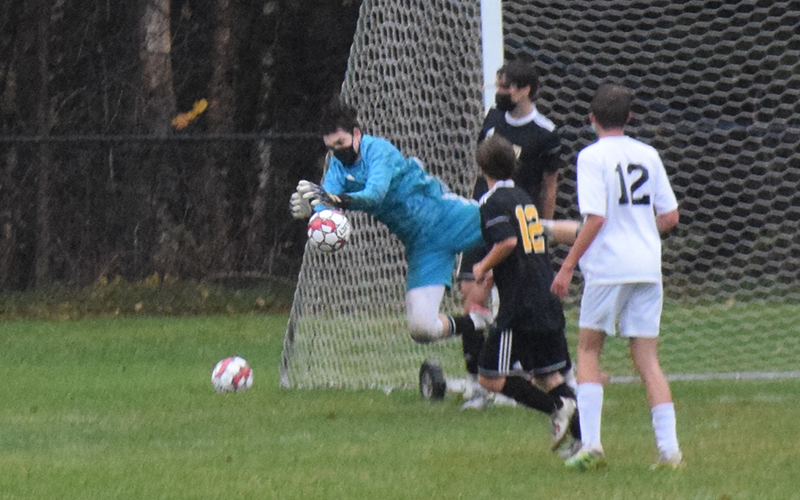 Harwood boys’ soccer hosted Route 100 rivals Stowe High School on Tuesday, October 20, and despite goals from Hayden Adams and Sawyer Simmons, lost to the Raiders 3-2. The loss moves the Highlanders from second to fourth in the Vermont Principal’s Association rankings, while Stowe moved from third into second going into the final game of the season and looking towards playoffs.

Before the game Harwood held a ceremony for senior day and honored six seniors and their families. Gavin Thomsen, Hayden Adams, Morgan Frank, Jasper Koliba, Sawyer Simmons and Jacob Collier were feted by Harwood coach Joe Yalicki and players presented bouquets to and had photos taken with their families.

The game started fast and loud for an injury laden Stowe team with an opening goal from T.J. Guffy, assisted by Henry Riley inside of three minutes. Guffy used his speed to get down the right wing past the Harwood defense and drive a goal inside keeper Jake Collier.

Harwood regrouped and fought their way back into the game eventually winning a penalty shot when forward Finn O’Hara was taken down from behind in the Stowe box. Stowe goalkeeper Isaiah Schaefer-Geiger made a great save to his left denying Jack Birmingham the equalizer.

Harwood looked like they had another opportunity after O’Hara was dragged to the ground again in the box and the sideline referee signaled penalty. The field ref eventually stopped play to confer with his assistant and decided to disallow the penalty and resumed play.

Harwood found an equalizer in the 13th minute as Adams drove from the left wing, cut to his right across the box and shot back across the goal sending the teams level into half time.

“We did well to create chances today, but missed a few chances too,” said Yalicki. “Isaiah Schaefer-Geiger rarely bobbles let alone lets up a full-on rebound so we had to be clinical in the 18.”

In the second half, Stowe resumed their high-intensity pace and aural attack challenging for every ball. Stowe’s Adrian Bryan capitalized on a free-kick opportunity in the 55th minute in the Harwood half, sending in a stunning long shot that slid in just under the bar and over the outstretched hands of Collier.

Taking advantage of their momentum, and despite some diving saves from Collier, Stowe scored in the 68th minute on a shot from Wiley Barnett assisted by Jono Nissenbaum putting them up 3-1.

Harwood scrapped for chances and finally found an opening in the 71st minute when Adams sent in a pass from the left that sailed across the Stowe goal past a jumping O’Hara where Simmons on a post run found it and headed it into the next cutting Stowe’s lead to one.

Harwood had a few more opportunities but could only find the arms of Schaefer-Geiger and the game ended 3-2 for the away side.

“There's a lot to learn and take away from a loss like today,” said Yalicki. “We made just a few mistakes today but they all impacted the final score. Mistakes to a championship caliber team are much harder to overcome.”

Stowe coach Shane Bufano was elated with his team’s performance “I am so proud of the way the boys played today. That was the most intensity I have seen from them as a collective group all year.” Adding, “I tip my hat to Coach Yalicki and the Harwood team, that was a really well-played, high-intensity game all around and one that could be fun to watch in November if there is a rematch.”

Harwood heads to Lake Region on Friday, October 23, for a 4 p.m. start to their last regular season game of the year. Looking ahead to Friday’s matchup and into the playoffs, Yalicki wants to see more from his squad. As for a potential rematch, “Our only chance to play Stowe again would be as a road underdog or in the finals. We have set ourselves up with a challenge and now we have the opportunity to respond. That's the silver lining,” said Yalicki.