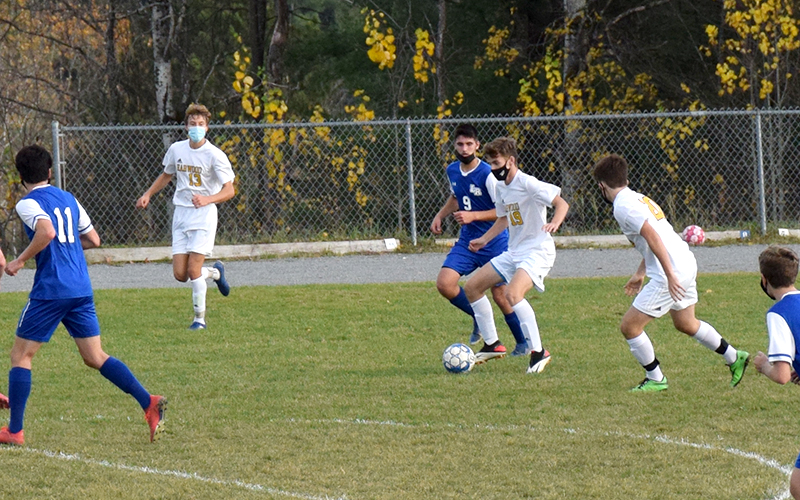 By Jeff Knight with additional reporting by Ellett Merriman

Harwood boys’ and girls’ varsity soccer teams are headed into the playoffs this week. The undefeated Harwood girls’ team goes in ranked No. 2 and will have a bye until Saturday, facing the winner of the Springfield-Lamoille playoff on Tuesday, while the boys’ team, ranked No. 3, will face Fair Haven on Wednesday.

The Harwood boys closed out their regular season Friday with an eked-out win away at Lake Region in Orleans. Going into the match team records would indicate that this should have been a game Harwood would dominate, but statistics and reality are not always on the same page.

Harwood struck first with a goal from forward Hayden Adams midway through the first half. And despite having more possession and opportunities, Harwood was unable to capitalize on their opportunities and thanks to a wonderful save from goalie Jake Collier, who would come up huge in the second half, went into the break with a 1-0 lead.

“I think that goes to show you how competitive D2 and the Capital League are,” said Harwood coach Joe Yalicki adding, “Lake Region doesn't have any wins this year, and many coaches I have talked to are surprised.”

In the second half, Lake Region came out swinging and eventually got their equalizer after repeated forays into the Harwood defense. That goal gave Lake Region an extra boost of energy that they used to keep up the pressure on Harwood. A strong Lake Region high press caused Harwood some trouble forcing wobbly passes that forced Harwood keeper Collier into some impromptu goal-saving maneuvers.

Harwood regained their composure and despite Lake Regions aggressive pressure found the game winner on bit of inventive interplay between forward Finn O’Hara and midfielder Jack Birmingham which allowed Birmingham to drive through the Lake Region defense into their box and tuck home the goal from inside the 6-yard box.

“Excellent goal that required him [Birmingham] to make an aggressive confident run into space, and I think one of the craftier assists we have provided this year from Finn,” said Yalicki.

The win means Harwood will face No. 14 seed Fair Haven at home on Tuesday.

“… especially this year, seed doesn't matter other than who has to travel and who gets their home field,” said Yalicki. “I am not expecting any teams to roll over in D2. We will need big efforts from all 11 on the field in order to advance.”

The Harwood girls’ team finished their year on a high note with back-to-back wins on Thursday against Route 100 rival Stowe and on Saturday against Lake Region capping an undefeated regular season and sending them into the playoffs as the No. 2 seed.

Team manager Ellett Merriman reported that Haskell, back from a knee injury, opened the scoring in the 20th minute with an assist from Kayla Yalicki. Then in the second half Nelson got a brace from a free kick around 18 yards and her second off a shot that forced an own goal (OG) by Stowe. A late goal from Emma Ravelin who followed her goal with an assist to Proteau for her first goal of the season capping off the shutout win for the Highlander ladies.

On Saturday, the girls’ team headed to Lake Region where they continued their strong play with a 5-1 high energy win over the Rangers with goals from Louisa Thomsen, Ashley Proteau and Tela Haskell.

Thomsen opened the scoring putting in a penalty kick after a trip in the box after just five minutes. She followed that up with an assist to Proteau to put the Highlanders up at the half.

Harwood dominated the ball in the second using the entire pitch, switching the field and working the ball to their wingers creating space and opportunities. Haskell and Thomsen took those opportunities with Haskell scoring midway through the half and Thomsen getting a last-minute goal with 46 seconds left on the clock.

Merriman summed up the girls’ season, “This game wrapped up a beautiful undefeated season for Harwood’s varsity girls’ soccer team with 48 total goals and 26 assists. The team was only scored on four times. It’s been a phenomenal season and everyone is sad to see it end but excited to “take back the chizzy” as everyone on the team would say.”

Harwood heads into the playoffs as the No. 2 seed, with a first-round bye and will play the winner of the Springfield-Lamoille game on Saturday.