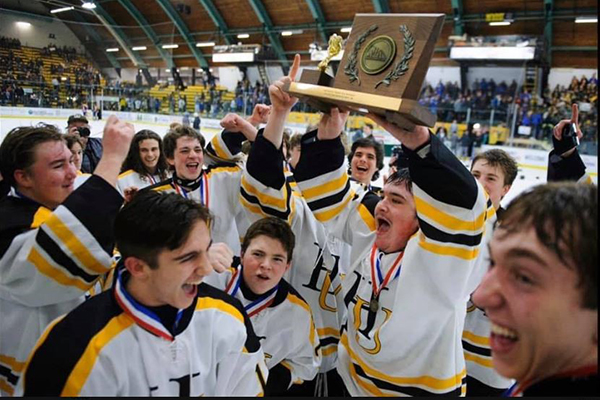 Harwood boys hockey is off to a rocky start to the delayed high school winter sports season after the abrupt departure of head coach Jacob Grout before the team’s opening game.

Shawn Thompson, who will coach the team for the rest of the season, was at the helm Wednesday night along with assistant Martin Casey as the Highlanders traveled to play U-32.

Harwood skated to a 3-2 victory, but not without ample drama on and off the ice.

Two Harwood players were ejected from the game midway through the second period and the cross-town rivals combined for 53 penalty minutes. Every goal was scored on a power play and there were several lengthy stretches of 5-on-3 action.

Meanwhile, parents and fans vented in the community and on social media after news broke that Grout was no longer coaching the team. Multiple posts referenced a text message from the coach to players that included offensive language and prompted at least one complaint to school officials.

Several parents of players mentioned “outrage” in the community and “overwhelming disappointment” among the players about Grout’s departure. Many started using the hashtag #westandwithcoachgrout to link their comments online.

Reached by the Times Argus on Wednesday, Grout acknowledged that he had parted ways with the school. He said he did not want to comment further other than to say that he accepts the administration's decision and is not fighting it.

In emails Thursday with the newspaper and Waterbury Roundabout, Harwood Union Co-Principals Laurie Greenberg and Megan McDonough called the situation an employee matter.

“We are a public school institution bound by polices, regulations, and laws. All complaints must be taken very seriously. Coaches must be held to the same standard as any paraeducator or licensed teacher,” the principals’ statement said. “They are very strong role models and have huge influence in significant ways in the life of our youth. We are all doing the best we can in this very difficult situation."

The principals noted that Thompson has been named head coach for the remainder of this season and that Casey remains with the team as assistant coach.

Grout’s departure is a blow after he helped the five-time champs return to their winning ways during his first year on the job last winter. The Highlanders went 7-10-3 during the 2018-19 season before Grout took over coaching duties and led the squad to its first title in 15 years.

Last March, the Highlanders secured a 3-2 overtime victory over Milton at UVM’s Gutterson Fieldhouse in the Division II final. The heart-stopper was one of the last winter high school games to be played before COVID-19 prompted Gov. Phil Scott to issue a “Stay Home/Stay Safe” order.

Coming off a 20-3 season last year, the team looked forward to the state easing public health restrictions to allow for a shortened winter season to commence. But Harwood’s first match was delayed several days due to COVID-19 protocol that sidelined the team for contact tracing and testing. After getting an all-clear, the team traveled to Montpelier for Wednesday’s game that was marked by numerous penalties and disruptions.

The Harwood principals acknowledged that the move to replace Grout comes at a tough time.

“We feel very badly about the impact and pressure on the players and will do whatever we can to support them,” they wrote.

Grout is a 2008 Harwood graduate who replaced former coach Shaun Morse in 2019. During his time as a student, Grout played varsity hockey for the Highlanders for three seasons. He later spent six years as a coach with the Harwood Youth Hockey program, working with many of the current Harwood players at the Bantam level.

According to Coakley, that bond was paying off in the rapport between Grout and the team.

“Jake was able to give our boys what they needed most – a purpose for their team through leadership and direction,” she wrote. “The boys listen to him and respect him because they can relate to him.The fact that he was able to turn our team around and lead them to a state championship in one year speaks volumes.”

The Highlanders are scheduled to host Hartford at 3:30 p.m. on Saturday.