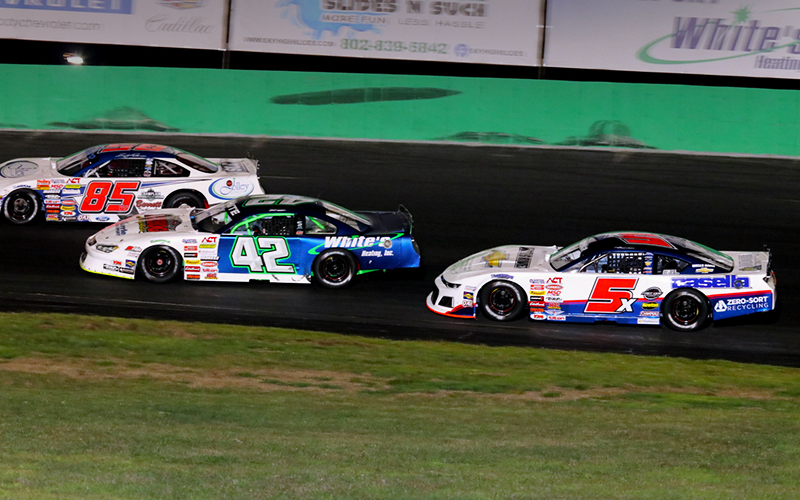 The Thunder Road stock car racing season opens this Sunday, May 2, with the 23rd Community Bank N.A. 150. For the 76th time, the American-Canadian Tour (ACT) Late Models are coming to town for an ACT Tour championship event. Focus will also be on the local Maplewood/Irving Oil Late Model racers who will defend their stomping ground live worldwide on FloRacing.

Although the Community Bank N.A. 150 doesn’t count for Thunder Road points, most of the weekly field is expected to attempt to qualify for the event. The event is also a tune-up for the Mekkelsen RV Memorial Day Classic on May 30, which officially begins the “King of the Road” case.

“It’s the opening race of the season, and it’s one of the bigger races at Thunder Road,” Fayston’s Brooks Clark said, “Maybe it’s not as prestigious to some as the Milk Bowl or Labor Day, but for me, it’s right up there. It’s an ACT Tour race, and I’d be just as happy to win it as any of the other big races.”

“I think just in general, the competition at Thunder Road is a lot tougher than at a lot of other tracks,” Clark noted. “Not to say that other tracks don’t have good competition, but I feel like everybody at Thunder Road sets themselves to a higher standard. When you go win a race at Thunder Road, it doesn’t matter if it’s a Tour race or a Thursday night — it means something.”

The weekly Late Model warriors are ready for another round against the invaders. Therrien is an established titan at Thunder Road with the 2017 “King of the Road,” 2019 Vermont Milk Bowl and 2020 Labor Day Classic among his conquests. A Community Bank N.A. 150 is one of the few checkmarks missing from his Thunder Road résumé. Clark, the 2019 Vermont Governor’s Cup winner, aims to improve by one spot on last year’s second-place finish.

ACT Tour regulars will give it their all when they roll through the gates. For reigning ACT champion and recent Northeast Classic winner Jimmy Hebert of Williamstown, VT, a Late Model win at Thunder Road is the last major item on his racing bucket list. Hebert has two runner-up finishes in the Community Bank N.A. 150 and is eager to finally seal the deal.

Turner, ME’s Ben Rowe, a many-time Pro All Stars Series champion, wants to improve on his past Thunder Road results. Young stars Derek Gluchacki, Tom Carey III and Erick Sandsmust carry their success at other tracks over to Thunder Road if they want to contend for a title. Others such as D.J. Shaw and Shawn Shallow are already in a hole that they need to dig out of fast.

Thunder Road opens its 2021 season on Sunday, May 2, at 1:30 p.m. The stars of the ACT Late Model Tour and Maplewood/Irving Oil Late Models will go at it for 150 green-flag laps in the season opener. The Lenny’s Shoe & Apparel Flying Tigers, RK Miles Street Stocks and Burnett Scrap Metals Road Warriors join them with a full card of racing.

All Vermont state attendance, health and safety guidelines are in effect. The event will also be live streamed worldwide on FloRacing via their website, mobile app and most smart TV platforms.

The weekend begins with the annual Car Show at Thunder Road on Saturday, May 1, from 9 a.m. to noon. An open practice is slated for Saturday afternoon followed by the 2020 ACT/Thunder Road Banquet of Champions at 6 p.m.

For more information, contact the Thunder Road offices at (802) 244-6963, This email address is being protected from spambots. You need JavaScript enabled to view it., or visit www.thunderroadvt.com. For more information about FloRacing, visit www.FloRacing.com or www.FloSports.tv.