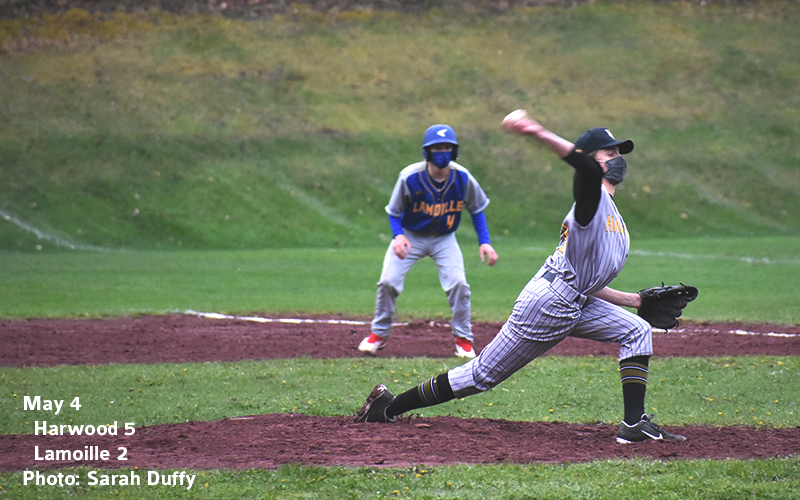 On Monday, May 10, the Harwood varsity girls’ lacrosse team beat Lamoille 9-7. This victory put the Harwood girls on the board after a series of losses the previous week. The previous Monday, the girls played GMVS and lost 18-5. During this game the girls had some good goals, however. Defender Cameron Rocheleau took the ball end to end and finished with a strong goal. Aliza Jernigan and Anna Kudriatvez had one goal apiece. Charlotte Cook scored two goals and Kaylee Cameron, goalkeeper, had 10 saves.

On Tuesday, May 4, the girls lost to U-32, 10-13. Maggie Aiken put the first two of her 3 points on the board in the opening 5 minutes. Ava Thurston scored next. Charlotte Cook tallied three goals. Anna Kudriavetz had one goal. And Amy Cook added one goal as well.

“We made good progress in the game vs U-32. Having back-to-back games isn’t always easy, but they stayed hungry and worked to play Harwood lacrosse,” said coach Hillary Wheeler.

On Tuesday, May 11, the Harwood boys’ varsity lacrosse team defeated Spaulding with a final score of 14-6. Spaulding got off to an early 2-0 lead at the beginning of the game. However, the Harwood boys soon caught up, keeping the game tight for the first half with Spaulding holding leads at 4-2 and 6-4. Things changed late in the second quarter, when Harwood scored three goals in a row and lead 7-6 at halftime.

The Harwood boys played their best game in the second half. With patient offense and strong defense, Harwood was able to score seven more goals.

“The HUHS girls’ varsity team exhibited talent and flexibility on the courts this past Monday, quickly adjusting to the indoor venue from a season of outdoor practices and competitions,” said coach Jo Lynn Ostler. “While the courts were faster and a bit slick, all team players moved gracefully to adjust their game.”

“Further, our singles players held to consistency during play and doubles rendered the same; along with tenacity,” said Ostler.

However, the Harwood boys won five and lost one singles match that day.

“They played well,” said coach Seth Mikle. “Each one of those matches could have gone the other way. The team is young and they don’t have a lot of match experience, but they are gonna get better with each outing. They are still learning how to close out a matches.”

On Tuesday, May 12, the Harwood Boys Varsity Baseball team defeated North Country in a 12-8 victory.  “The team played well with a good intensity level thorough the game,” said coach Dominic Moreno. “There was an inning where we let them tie up in the score, and i believe that they boys responded well offensively to put the game out of reach.” The Highlanders advance to 3-2 on the season.

On Saturday, May 8, the Harwood girls’ varsity softball team lost to Williamstown, 30-10. Their game against U-32 at home on Tuesday, May 11, was canceled due to rain.