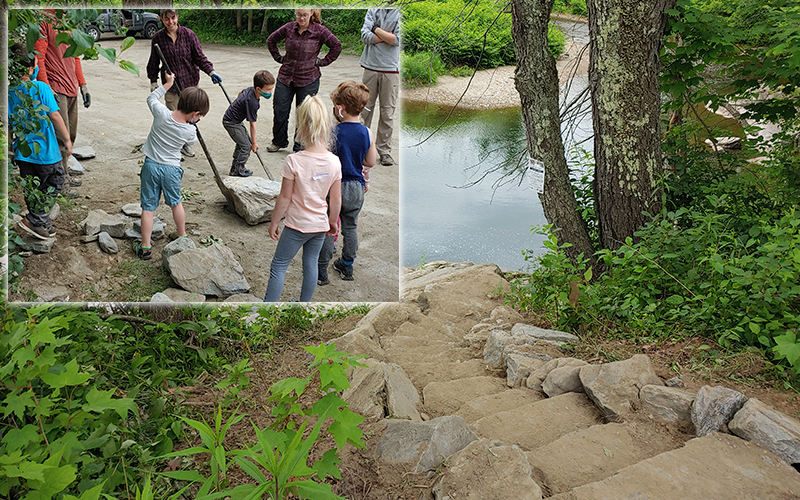 Just two months after seeking state and local permits in April, Waitsfield stewardship and conservation organization Northern Forest Canoe Trail (NFCT) completed its work along the Mad River Path’s West Greenway trailhead off of Meadow Road in Waitsfield. While the scale of the project slightly exceeded initial expectations, everything else proceeded as planned. And thanks to their partners in the community, it also became a teaching opportunity for the kids at nearby Neck of the Woods child care.

NFCTs plan was to address river accessibility at two points along the bank. At one, dubbed Whaleback Rock, they sought to install two to three stone “check-steps” to reduce slipping, slow stormwater and mitigate erosion. The other, called Upper Ledge, called for 14 steps between 2- and 3-feet wide, as this latter section was particularly steep, root-laden and eroded. According to NFCT’s stewardship director Noah Pollock, both projects demanded a little more TLC than initially thought. At Whaleback Rock, they ultimately installed 11 steps. At Upper Ledge, 19 were required. He pointed to erosion as a key factor, which was worse than they anticipated.

But Pollock did not see this a setback, but rather as a reminder of the work still to be done.

“This is the first of what we hope to be a series of projects in the Mad River Valley to mitigate the impacts of recreational use along the water,” he said.

To better address these impacts and ensure the project was undertaken with the environment and community in mind, NFCT networked with a number of local partners such as Friends of the Mad River, the Mad River Path, the North Branch Condo Association, and state flood plain manager Ned Swanberg. In addition to providing their permission and consultation, these organizations presented other ways to reach out to the community.

Neck of the Woods (NOW) child care, which neighbors the West Greenway trailhead, is a member of the North Branch Condo Association. NFCT initially came to NOW seeking approval and ended up with a counteroffer: to turn the river access project into an educational opportunity for the kids at Neck of the Woods. They were happy to oblige.

On Friday, June 11, the kids were taught about erosion and how to use stones to prevent bank degradation. They even learned to use levers to dig out particularly heavy stones and work together to problem-solve. They were visibly excited to contribute to the project. While it was a great experience for the kids themselves, Pollock also described how it felt for his team.

“We always like opportunities to teach and share, and it was a good change of pace from just moving heavy stones all the time,” he said. “We hope that we inspire them to think about how they can reduce their impacts when they access the water.” For him, it was about instilling that sense of stewardship early.

“Maybe they’ll join the trail crews in high school. Who knows?” he added.

Noah emphasized it is a reminder of just how important trails and waterways are to future generations and how important it is to be mindful when accessing them.

“Our rivers belong to all of us,” he said. “We all have a responsibility to take care of them, and the Northern Forest Canoe Trail is helping where we can.”