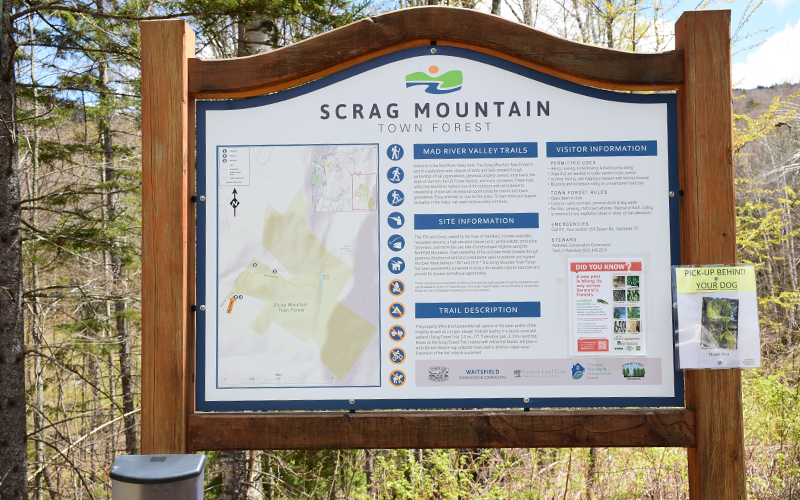 Since Waitsfield purchased the 110-acre Scrag Gateway to add to its Scrag Mountain Town Forest, the Waitsfield Conservation Commission and local partners have been working on a plan for an extended trail network at Scrag Forest. While trail expansion remains in the planning stages, visitors can still access Scrag Forest via the new gateway. A parking area, trailhead kiosk, footpaths and other attractions mark the site off of Bowen Road in Waitsfield. It has allowed for greater access to the forest and laid the groundwork for further development.

Phil Huffman, former chair and current member of the Waitsfield Conservation Committee, described the beginning of the project as “bootstrap” effort on the part of members and volunteers. He referred to the proposal as a “modest expansion,” and said they were now at a stage of the project where networking with the community and outside expertise was paramount. This includes taking ecological inventories to determine how the natural landscape and its inhabitants will potentially be impacted by the new development.

“We are just in the planning process to figure out what potential adjustments or additions might be desirable and make sense,” said Huffman. “We’re working with our trail consultants to ground the trail planning in ecological and environmental information.”

He also pointed to the vast community resources the Mad River Valley has to offer and hoped to work with the Mad River Path and other trail associations to draw from their experience. Community input too, he said, was instrumental to the ongoing project. While there remains much to be done, the work thus far has drawn greater public interest in Scrag Forest.

“We’re really appreciative of the community and public interest in Scrag, and we’re really delighted to see the use of the property and the trails that is happening these days,” he said.  “There are a lot of people that have participated over the last six months.”

For Huffman, it was not about fast-tracking the process, but about making sure it was done in the spirit of the community – with conservation in mind. Creating avenues for long-term stewardship, gathering relevant ecological data and talking to the community was essential to the process. And although stones remain unturned, he was optimistic towards the future.

“It continues to be a work in progress, but we’re really looking forward to how we can further crystalize a vision for an enhanced trail network at Scrag and put that in motion,” he concluded.

In June 2016, Waitsfield received a grant of $256,650 from the United States Community Forest Program to extend Scrag Town Forest. In July 2017, the Scrag Gateway Parcel was purchased from owners Howard and Judy Saffan for $450,000. The difference was covered by a number of benefactors: the Vermont Housing and Conservation Board (VHCB); Waitsfield’s Restroom, Recreation and Conservation Reserve Fund; and charitable donations from more than 85 community donors totaling more than $145,000 for stewardship and trail development.