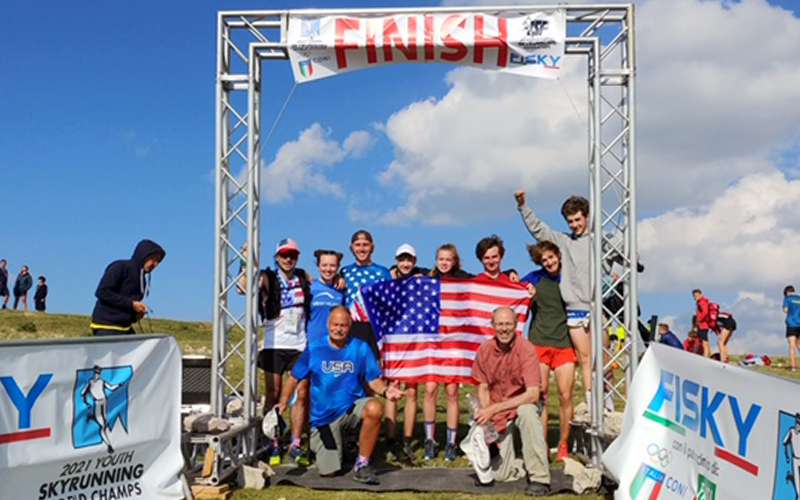 Kerrigan, of Ripton, VT, and his father John Kerrigan, longtime Harwood Union cross-country coach traveled with a team of eight runners (three from Vermont) for the July 30 through August 1 competition.

This was the fourth year that the U.S. team participated in the last five years. The team attained top five finishes in 2017, 2018 and 2019. The 2020 championships were canceled due to the pandemic. The U.S. acquired several podium finishes in the past. Kings Beach, California, resident Sophia Sanchez won gold medals in both the 2018 and 2019 championships.

Organizers were not sure that the European Union was going to allow U.S. citizens to set foot in Italy until a month before the event.

“This was the smallest group we have taken to the world championships since 2017. Injuries to two of the runners while training after arrival in Fonte Cerreto limited the team to just five that were able to compete in both the VK and the Sky race,” Ryan Kerrigan said.

“The group we took this year may have been small in number but large in enthusiasm and in the emotion for the sport. Although they hailed from a variety of regions of the United States, they bonded quickly and displayed tremendous support for each other,” he added.

Skyrunning is new to the United States. In Spain, it is second only to soccer in popularity and success according to Kerrigan.  He noted that in most of the European countries, the athletes’ origins are from one mountain range. For example, the Pyrenees in Spain, the Apennines in Italy, the Alps for the Swiss. Many European athletes have opportunities to compete head-to-head with each other with over a dozen regional races held every year. U.S. athletes live, train and compete in isolation from each other.

The athletes representing the U.S. trained and competed in a variety of environments. The Wasatch Mountains of Utah, the Chugiak range in Alaska, the Green Mountains of Vermont, the Sierras of California, the Rocky Mountains of Colorado and the Cascades of Washington and Oregon.

The isolation of the athletes provides few chances to compare performances and makes it difficult for coaches to choose a team. U.S. athletes train independently with fewer opportunities to develop a supportive network.

“Despite these obstacles, I was quite pleased with the athletes we chose to represent the U.S. at the 2021 championships. This mixed bag of mountain runners was spirited and feisty. They more than held their own with the European runners that have been living and training together,” their coach said.

The U.S. team finished ninth in the 20-team field. The competition was won by Spain followed by host Italy and an up and coming Norwegian team. Athletes from Spain were dominant as well in the individual races receiving 27 of the 57 total medals. For the first time ever, the U.S. team failed to place an athlete on the podium. However, two runners finished just a few steps off the podium. Parke Chapin from Bend Oregon placed fourth in the Vertical Kilometer (VK) in the U-18 boys’ race. Nowell Spencer, Alaska, finished fifth in the Vertical Kilometer in the U-18 age girls’ group.

Although the U.S. team had their best individual performances in the VK with Chapin fourth and Spencer fifth. It was in the Sky race where they excelled. For example, Finn Tower-Peirce improved 10 places from the VK to the Sky race.

‘We were foremost concerned with the safety of the athletes than the consistency of the distance” said Maurizio Regis, ISF meet referee.

Kerrigan is currently making plans for sky running camps during the 2022 preseason.