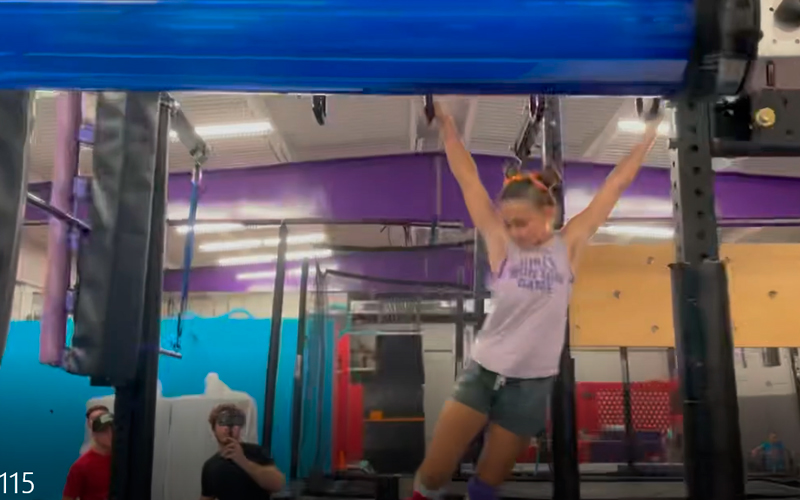 Brooke Kenyon, Waitsfield, will be 10 years old in a few months. She just took third place in an American Ninja Warrior competition in North Carolina last month and also took first and second place in a Pennsylvania competition earlier this summer in addition to competing in the world finals in Las Vegas in July. She is currently training for a competition in Buffalo, NY, in October.

She began taking classes with ninja McKinley Pierce in Essex three years ago and tries to train four days a week, balancing school work with that training. For her at-home training, Nick Kenyon (with help from his friend Royce Robare) converted the second floor of one of the barns at Kenyon’s into a ninja barn for her that runs south to north along the barn, featuring many of the same elements that she finds at competitions, plus a floor covered in mattresses for softer landings. Walls and new flooring were added as well. Adjacent to the second story ninja gym is a hay storage area that is open to the ceiling and features climbing ropes for training as well.

At the competitions, Nick explained, the athletes are judged on the number of obstacles they clear. If there are 10 obstacles and two ninjas clear nine of them, it comes down to who was fastest. Competitors who run and complete a course automatically qualify for the next competition. If they don’t quality they have to collect points or standings to continue to progress through the competitions.

Brooke’s family posted videos of her competing in two events this summer which show her aggressively moving through the course with almost zero hesitation or pauses between the events. Her dad moves around the course offering specific technical coaching to help her improve her speed and agility.

As for how much parents can interact while their kids are competing, Alison said, the rules vary from gym to gym and some places require parents to become certified coaches (which they’ve done).

“Nick is better at the technical coaching. I’m more supportive. He’ll watch and analyze and tell her things like to be ready to reach higher or which arm to have free for the next element,” Alison said.

“The more technical I can be with her, the more it helps. I study the course and the elements and if we can save a half a second on one piece and another and another, we can shave off time,” Nick said.

Brooke said that it helps to be able to watch the other competitors move through the course so she can gauge things like height or distance. The order in which ninjas compete is mostly random, but can be based on points or standings with the better ninjas going last.

Brooke plans to keep competing and her sister also continues to compete, although not as much. America Ninja Warrior competitors compete in junior and senior classes and she and her family know people in their 40s all the way to in their 70s who are competing. In the older divisions there are often cash prizes, less frequently in the younger divisions although Brooke and her sister have won some cash prizes.

In the videos, Brooke shows very little hesitancy as she moves through the course, something her parents say she’s made a lot of progress on thanks to many competitions in the last year.

“Balance used to be her weak spot, but she’s gotten a lot better,” Alison said.

“She’s had to work on that. We think a lot of competing has helped with that. And she’s learned to lower her center of gravity,” Nick added.

Brooke trains year-round between the ninja gym and some exercise equipment in the house. There’s a pull-up bar and she tries to do 100 pull-ups a day plus 100 sit-ups. A lot of the skills required for competitions is hand/arm and grip strength, Nick explained, and so when creating elements for the ninja gym he tries to make them a little harder than what she’ll encounter at competitions. That also makes it possible for her sister and their trainer to work out here.

While being interviewed, Brooke demonstrated a few of the elements with her parents watching calmly as she swung, leapt and launched herself through the air on the second floor of the barn, getting ready for the October competition. (See a video of Brooke in action at www. valleyreporter.com.)