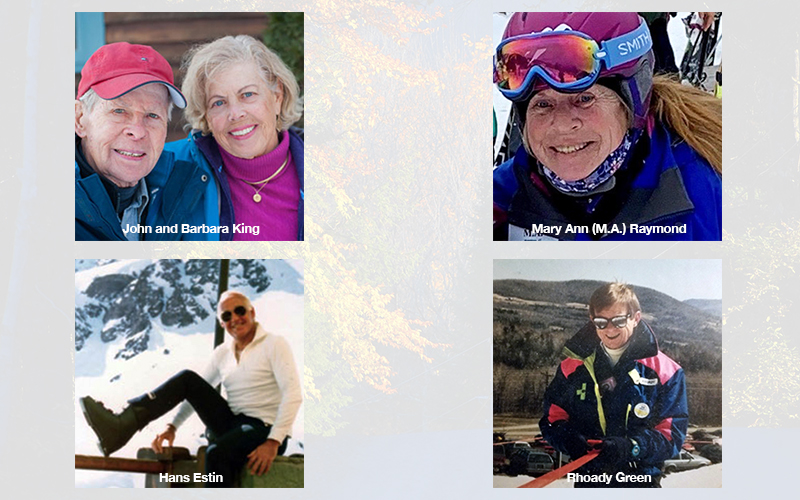 Sugarbush Resort announces the 2021 Wall of Fame class. Similar to a Hall of Fame, Sugarbush’s Wall of Fame seeks to recognize some of the most significant contributors to the Sugarbush experience from 1958 to the present. The Sugarbush Wall of Fame was established in 2019 as part of the resort’s 60th anniversary celebration.

The Sugarbush Wall of Fame recognition is awarded annually to those who have made a significant contribution to “cultivating a spirit of lifelong adventure and camaraderie among Sugarbush staff, guests and the community.”

Wall of Fame inductees are selected by the Wall of Fame Review Committee and for 2021 were decided as follows: John and Barbara King, Mary Ann (M.A.) Raymond, Rhoady Green and Hans Estin.

For over 25 years, Barbara King and her late husband John have been sharing their love and enthusiasm for the resort as Sugarbush Ambassadors. They have been among the longest serving ambassadors in the program, making routine treks to Vermont each winter and eventually moving to the Mad River Valley. Barbara continues to serve as an ambassador, always ready to help guests and acting as a crucial resource during last year’s pandemic season.

M.A. Raymond first joined Sugarbush’s ski school under fellow Wall of Fame inductee Sigi Grottendorfer in 1979. Her experience with children led her to become children’s supervisor before moving to teaching primarily private lessons. Raymond has been involved with the Centered Skiing movement as well as Sugarbush’s women’s programs. In 2001, she was named as one of the Top 100 Instructors in New England by Ski Magazine.

Rhoady Green was an integral part of Sugarbush’s ski patrol community dating back to the 1970s. He became ski patrol director at Mt. Ellen, then Sugarbush North around 1980 and was later promoted to Mt. Ellen’s mountain manager. He remained in that role until America Skiing Company took over in 1995. Green remained on the ski patrol as a volunteer, surpassing the 50-year lifetime achievement service aware pin.

The brother of longtime ski school director and Sugarbush Wall of Fame inductee, Peter Estin, the late Hans Estin was essential in helping Jack Murphy, Damon Gadd and Peter Estin start Sugarbush. Hans Estin contributed to Sugarbush’s “Mascara Mountain” label by bringing the stars and celebrities of New York up to the resort, including fellow Wall of Fame inductee Henri Borel and his wife Rosie. Hans Estin helped run the ski school and founded Ski Club 10, which he ran for many years.

For more information on the Sugarbush Wall of Fame visit www.sugarbush.com.