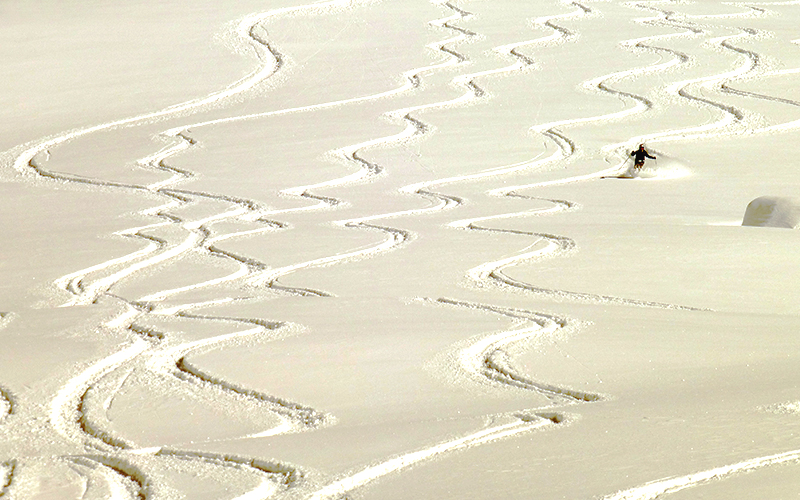 What is it about women on skis? A woman who rips is almost too much to fathom -- it is like a day of skiing with sunshine! That is exactly what we had for opening day. Cold, dry snow and cold, dry sunny weather. A light coating of natural snow over a chalk-like man-made base made for delightful carving on OrganGrinder. There is a new crew forming at Sugarbush this season and meeting a few of them on opening day added to the spectacular sunshine. Be sure to give a cold and snowy Mad River Valley welcome to Julia on Super Bravo lift ops. She hails from snowy Schweitzer by way of Crystal Mountain, so we can expect to see Julia’s tracks on powder days. If one ripping girl skier is a treat to meet, just to south of us an international contingent of World Cup women were lighting up the Superstar trail at Killington.

Quiet hands. Watching the women race at Killington, I was looking for who had the quietest hands. To understand something, anything, you could ask yourself: “What would be the ideal condition?” In skiing, “quiet” is the word that comes to mind for the hands. A good skier has a yogic-like movement, very much like the Warrior II pose where the hands are reaching outward, invisibly. In ski racing the arms reach in the direction that the racer wants to project the center of mass of the body. It was easy to tell who struggled by watching the hands of those who were quiet and those who were not. Expert skiers, racers, even some Austrians, struggle to maintain quiet hands.

Mikaela Shiffrin, the star, steps into the start gate just like everyone else, with the same challenge before her, even more so as the roar of the audience below adds to the pressure and expectation. Interviewed after her first GS run, she was asked about her recent injury. She avoided the subject. Athletes know better than to allow an injury to obtain residence in their consciousness. The injury is enough of a challenge to overcome without it gaining power with talk about it. The injury is not the story. The lack of aggression coming out of the gate, the wind, the wax, the over respect for the track -- that’s the story.

Parallel shins. The commentators discussed the concept of “parallel shins” while discussing something about Tessa Worley and her technique. Parallel shins -- I took that concept out on Grinder on Sunday and had a head smack of revelation.

Steve Gross or another of the ever-generous GMVS coaches must surely have told me about that concept eons ago. I don’t see why recreational skiers are not indoctrinated in race technique. If you are going to ski the tight and occasionally hard snow of Eastern skiing, then race technique is going to serve you well. Race-waisted skis at 65mm underfoot may seem out of fashion, but they are quick edge to edge. A race ski is built precisely for this terrain and our all too typical snow conditions.

“Parallel shins” are a simple, boiled down concept that makes everything line up and work right. This isn’t old style wedeln with two feet together and wiggling downhill. It is just the matching of shin to shin; what could be simpler? I don’t even understand it, but I tried it and I swear that it works! I did a quick search on “parallel shins” and the first three references were ski technique, most notably a Ron Lemaster photo montage of Vonn, Kildow and Mancuso. But right on the heels of the ski references were three yoga references, and that seemed appropriate. There are perfect parallels between yogic movement and fluid ski technique.

Snow. In the warm fall that we have had, it seemed like it would never come. Maybe that’s why the snowblower wasn’t prepared. When will it snow? Soon? Late? Maybe not at all? Finally, a blanket, a coating, a pelting, a wind-drifted accumulation, first tracks on a blank slope. Snow: it has the power of “now” built right into it. Snow, carried sideways by winter’s winds, deposited in hollows, plastered on the windward sides of trees, the return of storming, swirling snow. It is like nature’s glitter offering beauty as well as the gift of glide.