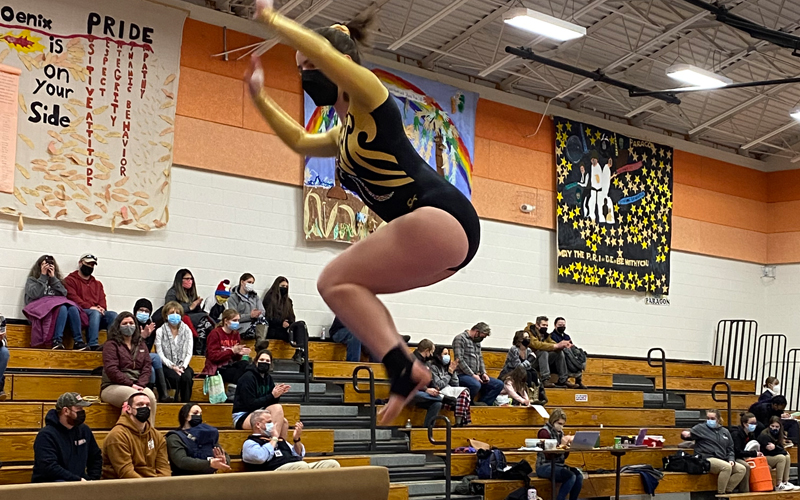 At the start of the winter sports season, Harwood Union’s athletic department announced that spectators would be permitted this year, after a year of spectators being prohibited at events. In early January, the school reversed that policy and then shortly thereafter, announced limited family members would be allowed to watch school sports. “Currently, we have moved to four-family member spectators per student-athlete, home or away. A lot of schools in our area are moving to a similar model as well,” Harwood athletic director Chris Langevin said, though that policy is subject to change as COVID continues to surge.

Last week, a social media post announced that no spectators would be permitted at the girls’ basketball game but it could be live streamed on the NFHS Network (www.nfhsnetwork.com).

“We started live streaming last winter as an effort to still have fans be able to watch the games when no fans were allowed,” said Langevin. “I installed the camera that broadcasts to the NFHS Network last November, and it will be a permanent fixture in our gymnasium. It is a fully automated 4k camera that tracks the action and broadcasts without the need to have someone be in person to do it.”

While live streaming games does allow spectators to watch from the comfort of their homes (as long as they have high-speed internet), it’s not free. “The NFHS Network is for all home (and some away) basketball games and costs $10.99/month,” Langevin said. “It is also the site used for all Vermont Principals’ Association championship games and on-demand viewing of past championship games. Hockey games have been streamed on LiveBarn, which was already installed in the (Waterbury) Ice Center.” A basic monthly LiveBarn subscription costs $18.95/month (a basic yearly subscription costs $14.95/month). Mad River Valley TV does broadcast some Harwood games for free, but the station has been having trouble finding enough camera operators to cover more games.

Alex Thomsen, the parent of a Harwood girls’ hockey player, said that while the LiveBarn subscription is expensive, it’s less expensive than paying for in-person admission to each game. So far this season, there was only one girls’ hockey game families were unable to attend in person.

“It changes the feel of the game without the student section and fans,” she said, but “The most important thing is kids being able to play.” She calls the LiveBarn streaming “not the best coverage, you can’t see everything and it’s kind of choppy, but it’s better than nothing.

The nice thing about Live Barn is that you can have multiple people in your living room watching the game, all for the same price. A family of four would have to pay $12 for one hockey game ($4 an adult, $2 a student). Also, families can save the travel expense of going to Brattleboro or Missisquoi and watch from home. So, while the subscription is expensive, it allows for more flexibility in viewing as well as cost savings if you are a family that attends games regularly. Also, out-of-state family/friends can choose to subscribe and watch. Ideally, we will have students back watching games soon as we miss our student section!”

Angela Young, whose daughter plays varsity basketball for Harwood, said her family has been able to attend most games this season. There was only one game at Harwood they weren’t able to watch. The availability of live streaming and spectator policies vary with each district. She has been able to view games on NFHS.

She called the subscription a “pretty nominal fee.” While she said she was not aware of families being unable to pay the subscription fee, she has live-streamed games on Facebook for friends to access for free. She said one benefit of the live-streaming option is that her in-laws can watch her daughter’s games from afar. “It’s been quite a year,” she said.