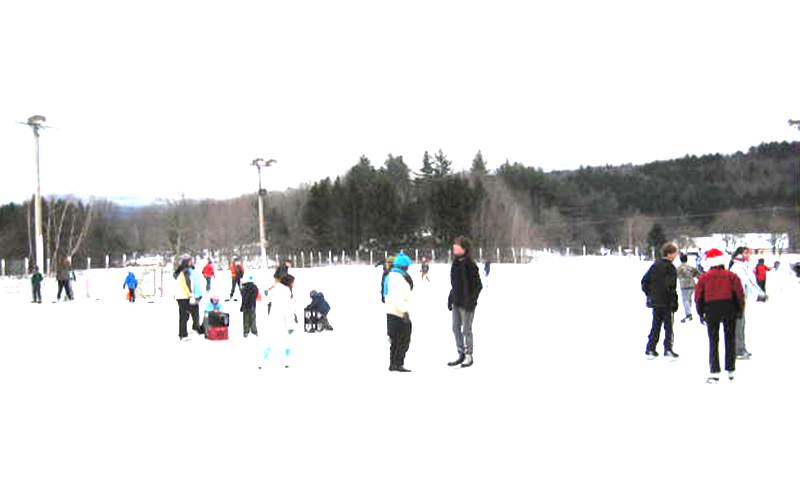 Last week’s warm temperatures and torrential rains melted the ice at the Skatium arena forcing Waitsfield’s outdoor rink to close early for the season. On Saturday, Skatium’s Facebook page said, “The ice is currently not thick enough for skating, even after applying two heavy coats of water today. The snow squalls and the warm temperatures made the process almost impossible. We're going to give it another shot on Sunday morning and see what we can accomplish before the heat of the day.” On Monday, Skatium’s Facebook post read, “Too much heat = no ice.”

Without consistent freezing temperatures until January, the rink opened for the season in early 2022 and was open less than two months due to weather. “We had a fantastic run in January until it melted,” rink manager John Townsend said.

Skatium offered public skating, pick-up hockey, and stick-and-puck this winter, even on the frigid days in January and February. It also played host to birthday parties and neighborhood gatherings. “We had a wonderful couple of nights of full-ice adult hockey,” Townsend said. The regulation-sized rink was cleared by what Skatium calls “the hardest working snow blower in The Valley.” Skate rental and crates for beginner skaters were also available. The rink is nearing its 30th anniversary and there are plans for a new rink in the works.

“We would have an extra month or two, at least six weeks, if we just had a roof,” Townsend said. “There have been plans in the works for a while. The trustees are working on a plan to make a new establishment” in the rink’s current location on Slow Road in Waitsfield.

One Facebook comment said, “This is a wonderful institution and I’m really glad that you keep it going.”