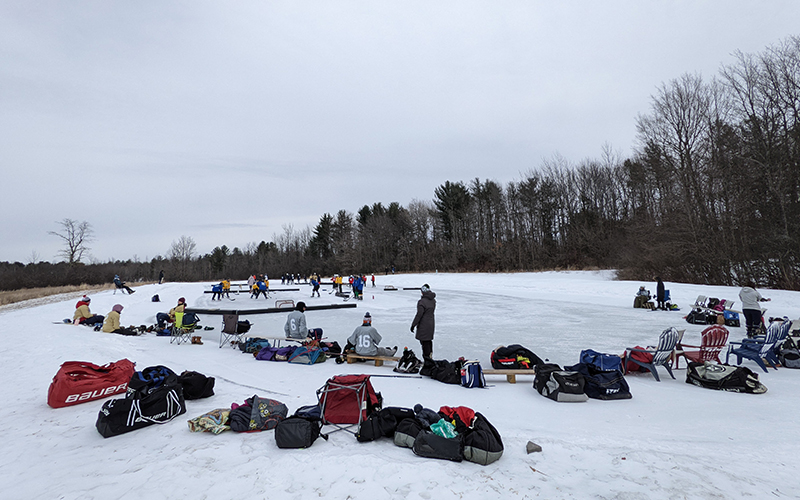 Women’s hockey became an Olympic sport at the 1998 Nagano Olympics, when the U.S. women won the first-ever gold for the sport. Since then, women’s hockey has blossomed, particularly in the state of Vermont, which is known for its winter recreation. Many varsity high school women’s hockey teams in the state were founded in the late 1990s and early 2000s and women’s college hockey in Vermont is going strong. The Middlebury women are undefeated this season, the UVM women’s team has a record of 21-10-3 this year, and Norwich University’s women’s team is 19-7-0. The Catamounts’ Sini Karjalainen played for the Finnish Olympic team this month and brought a bronze medal home to Burlington. UVM hosted the Women’s World Championships in 2012, where the U.S. team fell to Canada by one goal, just as they did in the 2022 Beijing winter Olympics championships.

The North American Hockey Academy (NAHA), based in Stowe, is a residential elite women’s high school hockey program which draws experienced skaters from across the country and Canada. Many NAHA players go on to compete in college and beyond.

The Waterbury Wicked women’s hockey team for intermediate and advanced adult “puck-hogs” plays on Sunday nights at the Waterbury Ice Center. There are also several co-ed leagues at the Ice Center. Previously, there were two women’s leagues in Burlington – Fullstride, which had several divisions based on skill level, and the Vermont Women’s hockey organization, which served more advanced skaters. Both have since gone defunct. While there is no women-specific hockey league in The Valley, the Skatium in Waitsfield was offering a weekly co-ed pick-up game until it closed early for the season last weekend due to high temperatures and rains that melted the ice.

This reporter got back on the ice last weekend for a women’s pond hockey tournament in Shelburne after a two-year hiatus due to COVID concerns. Despite the cold temperatures and wind, with variable ice conditions due to last week’s rain, women from throughout central and northern Vermont enjoyed three-on-three games all day with lots of laughs, cheers and fist bumps. After hesitating as COVID numbers surged, this reporter agreed to play in the Champlain Shoot-out in April, the biggest women’s hockey tournament in the state, which was canceled the last two years due to the pandemic. 2022 will be the tournament’s 20th year. Historically, the tournament has drawn dozens of teams from all over the northeastern U.S. and Canada and has taken place at Burlington’s Leddy Rink and UVM’s Gutterson Arena, Cairns Arena in South Burlington, the Essex rink and the Waterbury Ice Center. While tournament costs seem to be up across the board this year from previous years, many skaters are eager to get back on the ice together for what’s been called “the coolest game on ice.”

And where do these women players learn to love the sport, for the most part? Many of them learn to play in high school. Locally, Harwood Union High School's girls’ hockey team has had ups and downs this season, with a record of 9-9-1.