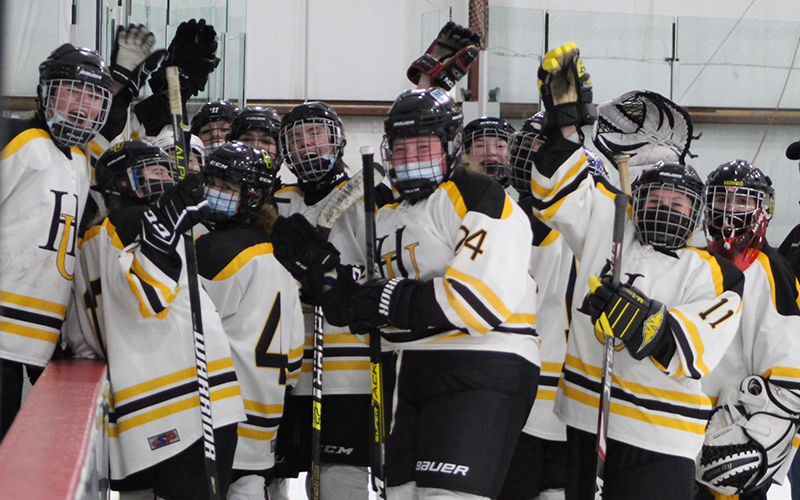 High school playoff sports continued this week. On Wednesday, March 2, the Harwood girls’ hockey team defeated Middlebury in the quarterfinal 3-2 in overtime. Harwood was ranked number 4 while Middlebury was ranked number 5 in Division II going into the game. Division II girls hockey player of the year Louisa Thompsen scored all three goals for Harwood. Highlanders goalie Jordan Hunter made 40 saves. Harwood will face number one seed Woodstock on their home ice in the semifinals on Friday, March 4 at 5:45 p.m.

Harwood’s boys’ basketball team faced U-32 in the playdowns also on Wednesday in a hard-fought loss, 53-45.

The Harwood boys’ hockey team’s season came to a close last weekend with a hard-fought 5-4 loss to Burr and Burton Academy in double overtime. “Unfortunately, the final bounce didn’t go our way,” Harwood coach Shawn Thompson said. “It was a spectacular game with multiple lead changes. The boys gave it everything they had and left it all on the ice. It’s tough to be on the wrong side of an overtime game, and it’s hard for the boys to put their hearts into it and come out empty-handed. But I’m proud of the way they played this game and the rest of the season.”

Harwood took the lead in the first period with goals by captain Tyson Sylvia and Adin Combs. Sylvia scored again in the second period, along with Garrett Nelson, giving the Highlanders a one-goal lead going into the third. Harwood struggled to score in the final period and Burr and Burton tied it up in the third.

“A special thank you to the seniors who have played for me the past three seasons,” Thompson said. “Their hard work and dedication has provided this team with a lot of success. They will be missed. Jordan Grimaldi is a player that started hockey three seasons ago. He has improved a great deal and become a great contributor. Addison Dietz is the Swiss Army knife that can play anywhere at a high level. He is also a great leader. Jake Green is the player that can make a big difference with his speed and skill. He was our leading goal scorer this season. Tanner Woodard is the player every coach wants. He’s talented, very hard working, a great leader and incredible hockey sense. Tyson Sylvia is the quarterback of this team. His talent is fun to watch and he has the ability to dominate the play. He was our points leader this season.”

Harwood’s girls’ hockey team defeated Brattleboro 2-0. Both goals were scored by Louisa Thomsen, who has been named the Division II girls’ hockey player of the year. Goalie Jordan Hunter, who is the first team goalie for Division II, had 40 saves. The girls will play Middlebury on Wednesday, March 2, as The Valley Reporter goes to press.

The Harwood Nordic team came in second place after Middlebury at a recent race at Craftsbury Outdoor Center last weekend, keeping the team in the running for the state title. Harwood’s Ava Thurston won the 5k race, followed by her sister, Julia Thurston, in fourth and teammates Maisie Franke in 19th and Hazel Lillis in 35th place. They competed in states on Monday and Ava Thurston took first place overall while Julia Thurston came in in second place and Maisie Franke came in 12th.

The boys’ basketball team defeated Thetford Academy 56-35 last Thursday and faced off against U-32 on Wednesday, March 2. No results were available at press time.