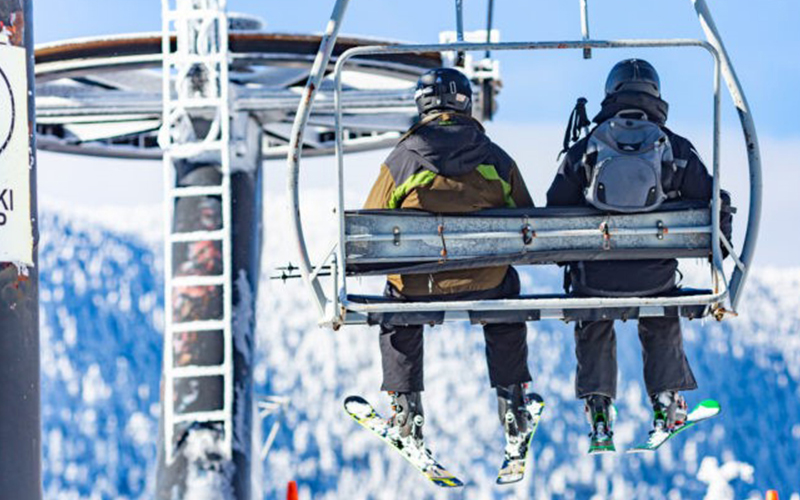 In response to skier feedback, Sugarbush communications manager John Bleh wrote a late February blog post entitled “Let’s Talk About Lifts.” In it he addressed issues the resort has faced this season with lift repairs, staffing and supply chain issues.

“We’d been hearing feedback in surveys and on social media about which lifts were running or open. We try to use our website and blogs to address the feedback we’re getting,” Bleh said.

“People were right on some of the circumstances that have caused us to have issues with lifts this year. We wanted to get ahead of it. The short version is that staffing was particularly difficult in the first half of the season, he said.

“There’s no denying that it’s been a tough year for lift operations, not just at Sugarbush but at ski resorts across the country. The reasons are numerous and varied. Recently, I had the chance to sit down with Patrick Konvicka, our VP of mountain operations, and Spencer King, our lift maintenance manager, in an effort to learn more about our lift situation and shed some light on our lifts this year for all of you,” Bleh wrote in the blog.

Bleh said that at one point this summer, Sugarbush was down to King, a single lift maintenance manager and said that in a normal year there would be some 15 lift mechanics on staff.

“We were able to get more staff, but even when you bring people on board, it’s not 0-60 mph all at once. We have all sorts of different types of lifts so there is a learning curve,” Bleh said.

Beyond staffing issues, Bleh said the weather this season has been extreme and unpredictable with huge swings in temps which led to its own problems – not just for Sugarbush but also for other resorts in the Northeast.

“Our Green Mountain Express (GMX) lift – and others like it in the Northeast – had issues when we put them away at the end of the day and there was a crazy temperature swing over night that impacted the hydraulics. When you stop a lift when it’s warm and the temps change drastically, the spacing changes and when you come back the next day, things are not as they were when you left them. We hadn’t had to deal with that before with this frequency, “Bleh explained.

Beyond weather, the GMX lift had a mechanical failure that prevented it from running as well.

“GMX, for example, was having issues with the mechanical pump on the gearbox, causing the lift to shut down. We had to replace this mechanical pump and interestingly enough, they only had two such pumps in the entire country, so our team worked extra hard with the lift manufacturer to get it here and installed as quickly as possible,” Bleh wrote in the blog.

This season’s extreme weather caused other issues as well.

“All of this doesn’t even mention the icing events we have had this winter either. These type of circumstances can’t really be prepped for too much, it simply takes crews out there in the morning at each lift chipping away at ice to get the lifts moving and spaced properly. That can again be attributed to these wild temperature fluctuations this year. Then remember it’s all humans doing this work. Our teams were out on the January 11 point you’re seeing on the chart, below -20 degrees (without factoring in wind chill), trying to get things prepped to open,” Bleh wrote in his blog.

He compiled a chart showing base and summit temps this since January 1. In January and February alone the resort and The Valley have seen major temperature swings from above freezing to below a dozen times. 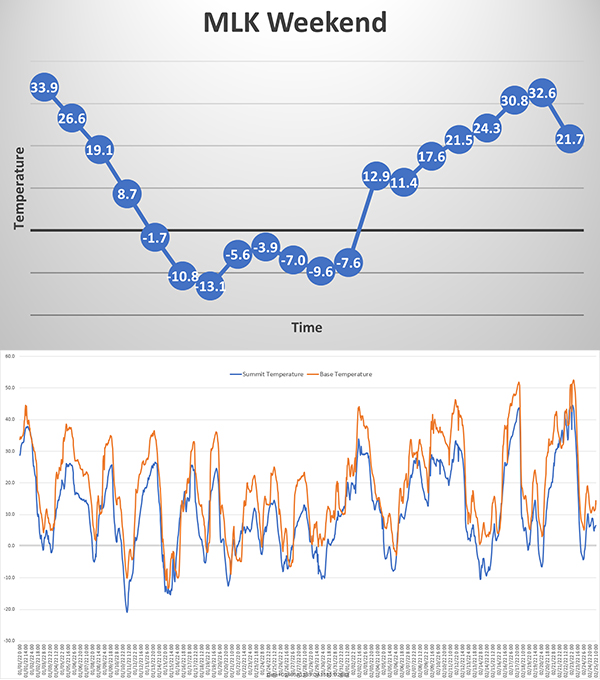 As if weather and parts issues and staffing weren’t enough, the North Ridge chair suffered a major lightning strike last summer. Sugarbush ended up having to bring in outside contractors to help with the electrical, line work and terminal work to get it ready for the season due to staffing issues.

“We didn’t realize the extent or amount of resources that would be needed to fix the problem. It took us two full months working with contractors and manufacturers to get it running,” Bleh said.

“Staff members were really focused on opening lifts that accessed new terrain and conditions were all over the place – it took a while to get the summit lift opened,” he added.

The Slide Brook Intertie Lift, which runs from Lincoln Peak to Mount Ellen only while bears are hibernating between December 15 and March 31, never opened this year. That was due to staffing but also the logistics of limited numbers of lift mechanics. Sugarbush and all ski resorts must do line checks on every single lift, every day running snowmobiles under each lift doing a visual inspection.

“Slide Brook is two miles long and the mechanics have to get under the lift and inspect it. With Slide Book that takes a little more than an hour to run that line. Staffing-wise, we couldn’t afford the lift mechanics to go and do that,” he said.

Despite the challenges, Bleh said the resort felt good about what its staff has managed so far this season and said that the lift upgrades, maintenance and improvements are a priority for the resort. He also said that the resort is working on finalizing a 10-year master plan in which new lifts are included in short/midterm plans.