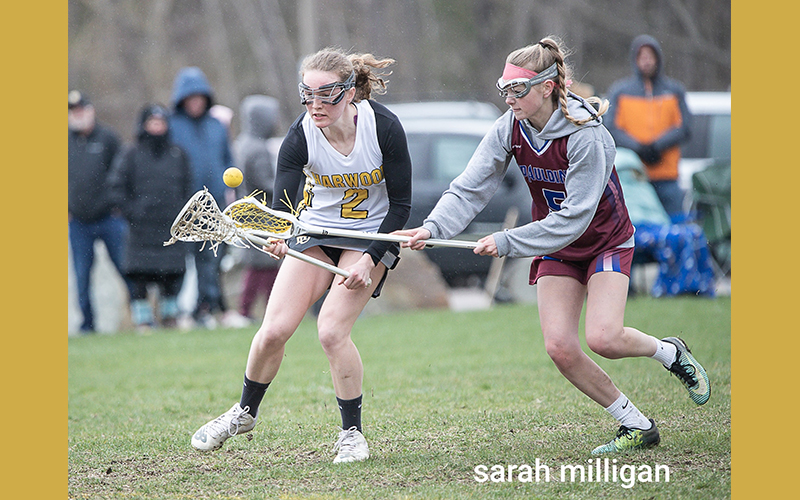 Last week, Harwood’s baseball team defeated Lamoille 12-3. “Jonah Halter started on the mound for us; Lamoille got going in the first scoring one run,” said coach Dominic Moreno. “Halter shut things down from there striking out eight, giving up five hits and three runs total over 4.1 innings. Nic Moran came in relief for Jonah, striking out six while giving up just one hit. Offensively, we got a slow start scoring only two runs through the first four innings and 10 over the fifth and sixth innings. Gus Mosle and Wyatt Ross led the team with two hits apiece. Mosle lead the team with four RBIs while Nate Conyers and Aidan Oshkello each had two RBIs apiece.”

This week, the Highlanders continued the streak with a 19-7 win over North Country after six innings. “We started the scoring in the top of the first with one run,” Moreno said. “Adyn Oshkello got things going for us with a double, scoring two batters later on a single by Chris James. We scored runs every inning of the game. Leading us in hits we had four players each with two hits -- Adyn Oshkello, Chris James, Nic Moran and Matt Fiaschetti. In total we had 13 hits. Jonah Halter, Moran, Fiaschetti and Aidan Vasseur led the team with three RBIs apiece. On the mound Jonah Halter started for us pitching 4.2 innings giving up six runs (only four earned) on six hits and four walks with two strike outs. Gus Mosle came in for relief and pitched 1.1 innings giving up one unearned run, one hit, zero walks and two strike outs.”

The Harwood boys’ lacrosse team is also having a good run with two wins in the last week. Over the weekend, they logged a 14-5 victory over Montpelier. Earlier this week, they beat BFA Fairfax 11-2. “Harwood continues to tally another W, taking on a very young BFA Fairfax team,” said coach Russell Beilke. “Harwood is victorious 11 to 2, once again led by Jake Green and Jordan Grimaldi. With Green’s four goals and Jordan’s three goals, the rest of the team was balance scoring. Addison Dietz had a 10-save game while the defense once again swarmed Fairfax.”

The girls’ lacrosse team has had a tougher week. Last Wednesday, “We had rain, snow, sun, wind, mud, freezing temps and a pretty decent match-up between ourselves and Spaulding,” said coach Hillary Wheeler. The final score was Spaulding 16, Harwood 6.

“After a long stretch of time between games, Harwood played strong in our second game of the season,” Wheeler said. “Senior captain Maggie Aiken put the first goal in for Harwood, junior Sadie Nordle netted our second goal and senior Ccptain Anna Kudriavetz added our third goal of the first half. Maggie Aiken would score a second goal in the second half and senior Ava Thurston added two additional. Abigail Leighty had eight saves.”

Over the weekend Harwood faced U-32 in much better conditions. “Sunny skies and warmer temps helped bring the spirits of all players, coaches, refs and spectators up today! Finally, a break from the nasty cold spring weather,” Wheeler said. “Senior captain Anna Kudriavtez netted the first goal of the game for the Highlanders, ninth grader Ilyana Valadakis added the team’s second and senior Ava Thurston added a third before the half-time break.

Abigail Leighty anchored the strong defense, coming up with 17 saves in net. Junior defender Molly Caffry had a fantastic game, with several caused turnovers and solid midfield play. We are lucky to have some really versatile players this season and our first-year players have strong athletic abilities and have learned the game of lacrosse very quickly. Junior Sadie Nordle scored our only goal during the second half. U-32 is a strong team who makes really great connections happen in front of the net.” The final score was Harwood 4, U-32 7.

Harwood’s girls’ tennis team faced off against Spaulding on Saturday.

In doubles, No. 1 Ruby Schnauzer and Hadley Anderson fell 3-6 and 0-6 to Spaulding’s Megan Rea and Emily Poulin. No. 2 Mae Murphy and Jillian Odefey played Avery Morse and Lily LaCroix, 3-6 and 5-7. The doubles score was Harwood 0, Spaulding 2.