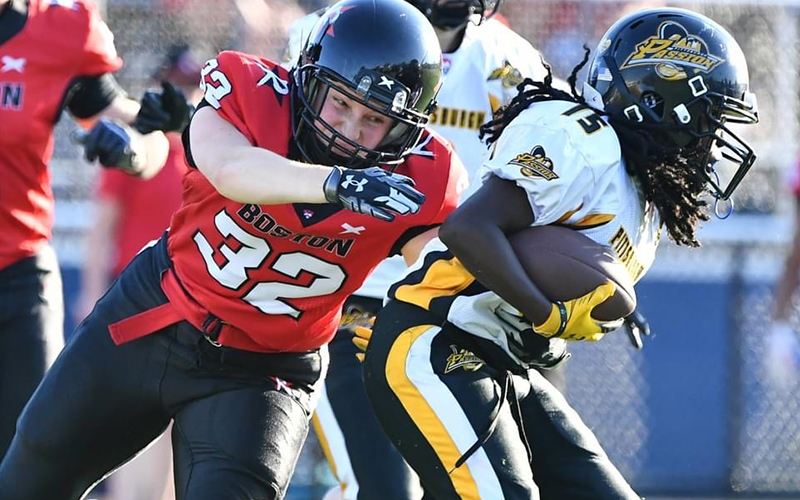 Kara Gailiunas, a Green Mountain Valley School graduate, will compete in her rookie year in the W Bowl, the women's equivalent of the Super Bowl this weekend in Canton, Ohio.

Gailiunas is a 2015 graduate of GMVS who missed competing in high-level athleticism after skiing competitively for GMVS and playing lacrosse at Boston College. Seeking that challenge, she learned about the Boston Renegades, a women's professional tackle football team going for their fourth national title on Sunday, July 10, in Canton, Ohio, at the Football Hall of Fame stadium. The game will be televised on ESPN2 live at 2 p.m. Per her mother Laura Gailiunas, that game is called the W Bowl and it is the women's equivalent of the Super Bowl.

Gailiunas, wearing No. 32 is a defensive back and special teams’ player.

"People's first reaction is that they didn't know there was such a thing as women's professional football and that they have a Super Bowl," her mother said.

Kara Gailiunas graduated from Saint Michael's College in 2020 after having skied for the school and GMVS. Then she did a masters at Boston College in sports business administration and worked in a job that had her in charge of all the women's teams, specifically Boston College women's lacrosse which held first and second ranking national last year and this year, respectively.

"She said she just kept feeling like I'm not doing being an athlete myself. She still wanted to be a high-level athlete and heard about the Boston Renegades. She tried out and made the team so this is her rookie year. All those skier agility skills are coming in handy," her mother said.

"She's so excited to be able to play with this caliber of women athletes," she added.

Her mother said that the women on the team call themselves the bigs and the smalls with the bigs being women who are 6-feet tall or more, weighing up to 250 pounds and the smalls being 5-foot women who can speed and can weave through everyone else on the field. Her daughter she said is 5-foot-8, big enough to take down a big and fast enough to catch a small.

When not playing professional football Kara Gailiunas works for Harvard athletics where she is an administrator for recreation sports.

Robert Kraft, who owns the Boston Patriots, is flying the entire Renegade team to Ohio on the Patriot’s private jet.

GMVS Where are they now