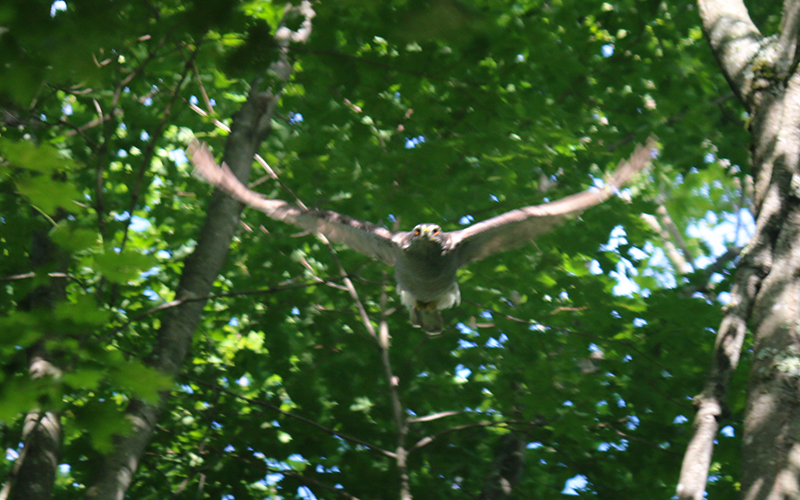 A Waitsfield mountain biker riding on the trails in the Howe Block of the Camel’s Hump State Forest was dived bombed by an aggressive northern goshawk protecting its nest over the weekend.

That rider, Audrey Huffman, suggested to the Mad River Riders that that section of the trails, Busternut, be posted and closed for  several weeks to allow the birds to fledge and the riders did so via social media.

Huffman said the Busternut trail is very near the end of Dana Hill and it links with the GS and Clinic trails. She encountered the protective parent on the part of the trail that is nearer to the Goodnight Irene trail.

“I biked in there late in the day on Saturday and came through some trees and the bird started squawking and dive-bomb me. It followed me down the trail. I was riding as fast as I could while trying to identify it. I saw that it was something like a big hawk with a pointy tail and sharp talons. The light wasn’t great and I didn’t want to hang out too long. I got out of its territory as fast as I could. It was kind of scary when something like that comes after you,” Huffman said.

Later, she texted several friends so see if anyone had had a similar experience and learned that her friend Kathy Haskell’s husband Steve had ridden the trail the next day and gotten dived-bombed in the same location.

“Last year I wanted to bike on some of the trails in the Little River campground and they had some trails closed due to this type of situation where a goshawk was nesting. So I was aware that that type of thing happens. I asked Kathy to reach out to the Mad River Riders to close the trail and let the bird have its space until the baby birds fledge. That’s what anyone should do for these large raptors,” Huffman added.

Huffman said she researched the northern goshawk and learned that the bird has a reputation as the most aggressive American raptor when it comes to defending its nest.

“When the nest is approached (especially soon after hatching) the goshawk will perform defensive 'kakking' vocal display accompanied by exaggerated swooping in flight which quickly phases into a violent attack, which may cause painful (but usually minor) injuries and blood loss. The incubation period lasts between 28 and 37 days and is done mainly by the female. At six weeks of age, the chicks become "branchers," although still spend much of the time by the nest, especially by the edge. They rarely return to the nest after being 35 to 46 days of age and start their first flight another 10 days later, thus becoming full fledglings,” Huffman reported.

“With this info, it sounds like it might be a good idea to close the trail for six weeks. The eggs must have just hatched for the parent to be acting this way,”she added.