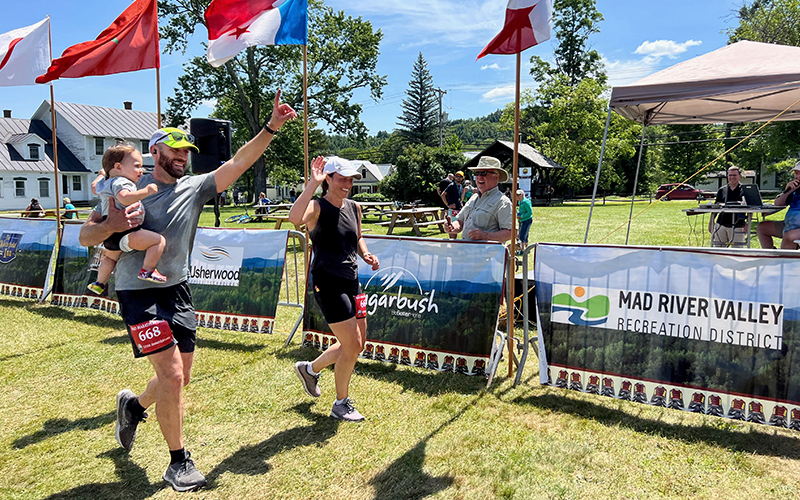 Runners from all over the United States with their families, along with athletes from five countries, arrived in the Mad River Valley last weekend for Sunday’s, July 10, Mad Marathon. According to race director Dori Ingalls, the Mad Marathon weekend was a spectacular event with perfect weather to share the beauty of the community.

“The Mad Marathon Expo and bib pick up began at 4 p.m. at Lawson’s Finest Liquids where a host of Valley volunteers introduced the runners to our community. Saturday the Waitsfield Farmers Market, which was well received with rave reviews from runners, followed by tours, swimming in the Mad River, a “Meet and Greet” with legendary runner Chuck Engle and topped off with a Mad Carbo Dinner. At sunrise on Sunday runners were welcomed by announcer Peter Graves and after an inspirational version of “This Land is Your World,” sung by Karl Klein, runners walked up Route 100 to the start line,” Ingalls said.

“The Mad Marathon would not be possible without the support of our residents, sponsors, volunteers and the entire Mad River Valley community. Thanks to all for embracing the marathon weekend. Standing at the finish line welcoming runners on Sunday was extraordinary along with emotional for everyone. With so many obstacles facing us in a world gone crazy, these runners were so happy to be able to compete again that I was consistently hugged, thanked, told that the Mad River Valley was a gorgeous place, the aid station hosts were awesome, the marshals amazing, it was their best marathon ever and yes, “World’s Most Beautiful Marathon.” Tears flowed and absolutely every runner shared that the race was now their favorite and the Mad River Valley community was a very special place. Rave reviews followed on Marathon Guide, Facebook, Front Porch Forum and other social media,” Ingalls added.

The two-person Mad Half Relay was won by Team Cecil Smith Inc with a time of 1:30:3. The five-person relay was won by one of three high school teams competing with their cross-country coach from Belmont, PA.