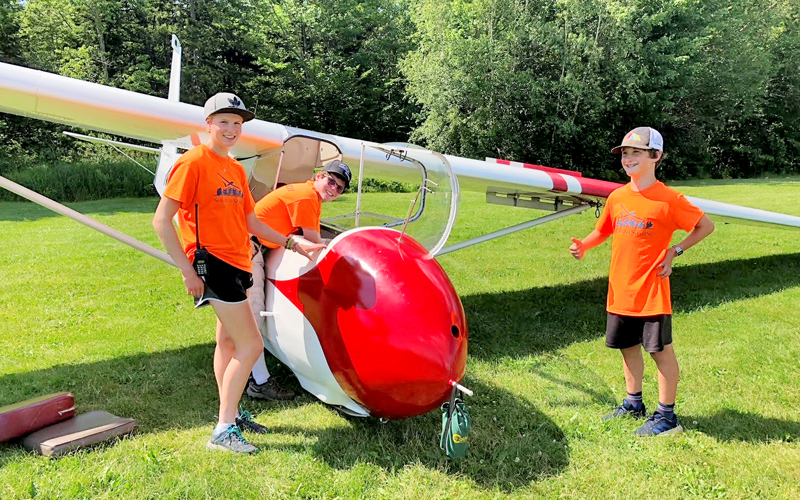 The line crew offers kids an opportunity to “work to fly”; for every day worked they earn a flight with one of Sugarbush Soaring’s FAA-certified flight instructors. “But what they actually receive is so much more,” says Tom Anderson, Sugarbush Soaring’s airport operations manager. “A former line crew kid said it best. He said that he realized what this is all about -- that we’re not just teaching kids how to fly. We’re teaching them about life through flying.”

Anderson has seen enormous growth in Gulley already. He recounts how Gulley first left a message, in a tentative voice, to inquire about the program. “He called back a couple of minutes later to say that he had forgotten to leave his number. I could see that this kid was motivated.” Andereson noted that after joining, they quickly develop self-confidence, maturity and focus. “We see the deep pride that comes from individual accomplishment. This kind of opportunity is especially hard to find in today’s digital world.”

A workday on the line crew is hard and long. Line crew members tow gliders across the field with golf carts, do safety checks, signal to the tow plane, and assist with myriad airport ground operations. They are responsible for maintaining a safe and smooth-running airport and for protecting expensive equipment. The work is not only physically but mentally stimulating – members learn everything from glider mechanics to aerodynamics of flight.

After a few days as a trainee on the line crew, Gulley was ready for his first flight. “When he came out of the plane, he was grinning ear to ear,” Anderson said. “I couldn’t help but think of his application essay. He said ‘I have always dreamed of flying without being in a machine, even though I know that is impossible.’ He’s now one step closer to that dream.”

The soaring youth programs are funded by Flight Experience for Youth (FEFY), a 501(c)(3) organization that raises money for the line crew program, as well as for youth soaring camp scholarships. FEFY recently introduced new scholarships to help encourage involvement in soaring from groups traditionally underrepresented in aviation, including women and people of color.

Kids as young as 13 can join the line crew program, and as they progress, they become teachers and mentors, like Danny, and grow through the experience of supporting their younger peers. Line crew members have gone on to earn their private pilot’s certification in gliders, their commercial and instructors’ certifications, as well as careers in aviation and aerospace.

Alex Scaperotta, Fayston, is a graduate of the line crew program who now works as an engineer at Beta Technologies in South Burlington. He said he is indebted to the line crew program which nurtured his love of flying and helped him to become a pilot. He devotes one of his days off every week to come back to The Valley to teach gliding. Like Gulley, when Scaperotta first started on the line he was small in stature. Now 24, he still looks young. “People come for scenic rides and say nervously, ‘You’re flying the plane?’ I have to reassure them that I’m completely qualified.”

To learn more about Flight Experience for Youth, visit helpyouthsoar.org/fefy or email This email address is being protected from spambots. You need JavaScript enabled to view it..