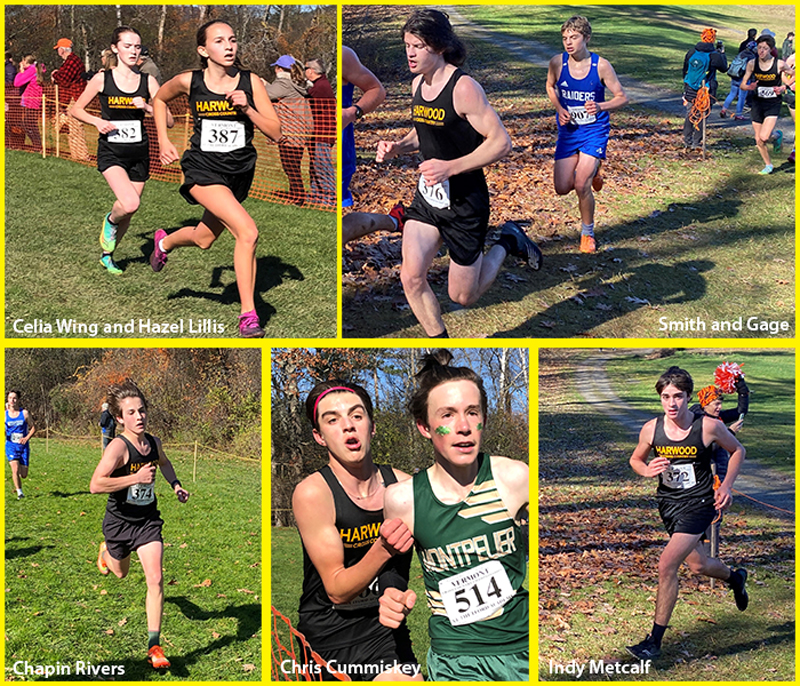 Our girls showed grit,” said Harwood head coach John Kerrigan. “Despite illness and injury, the girls battled to a remarkable third-place finish. It was an emotional day. Expectations were high. Harwood girls had beaten pre-race favorite U-32 earlier in the season. The girls’ race was won by U-32 and second place went to Middlebury,” Kerrigan said.

“We had beaten both of those teams earlier this season but we were not at full strength today. I knew it would come down to a war of attrition. All three of our teams were so close. It was going to be a matter of which team had the seven healthiest girls at the starting line. Our girls have been lucky all season, managing to avoid COVID and other flu-like illnesses all season. However, not today,” the coached added.

“Our girls are warriors; they will bounce back next week at the Meet of Champions. Our best success usually comes after our greatest disappointments,” he said.

Julia Thurston in eighth place led Harwood girls. Heidi Haraldsen placed 11th; Celia Wing (26) and Hazel Lillis (27) had strong finishes. The state meet was their first race in almost a month due to injuries. Maisie Franke (32), Charlie Flint (37) and Pippa Diller (38) helped the team to a solid third-place finish only a few points behind Middlebury.

“The young Harwood boys’ team was impressive. We have no seniors, on our team. We had four sophomores and one freshman in our top six and managed to run to a solid fifth place. This team is a year or two away from contending for a state title,” Kerrigan predicted.

Harwood boys were led by Indy Metcalf (11). Indy’s time of 18:23 was the fastest of the day by a Division 2 sophomore. Chris Cummiskey (21) was the fifth fastest sophomore in Division 2. Another sophomore Lincoln Gage placed 24th. Freshman Chapin Rivers (38) was the fourth fastest freshman competing at D2 states. Atticus Ellis (49) and Cooper Hansel (51) contributed to the team’s strong fifth-place finish.

“She is definitely our most improved runner,” Kerrigan said.

In the boys’ challenge race, Tanner Hatch placed 64, Nicky Service 73 and Victor Fowler, 137. All three boys were coming back from illnesses and injuries.

“It was a solid team effort and I am so proud of all of their efforts today. I know several were disappointed with the team result but third and fifth in the state meet were one of the best-combined finishes by any school in Vermont,” Kerrigan pointed out.

Harwood XC will travel to St. Albans for Vermont Meet of Champions on Saturday, November 5.