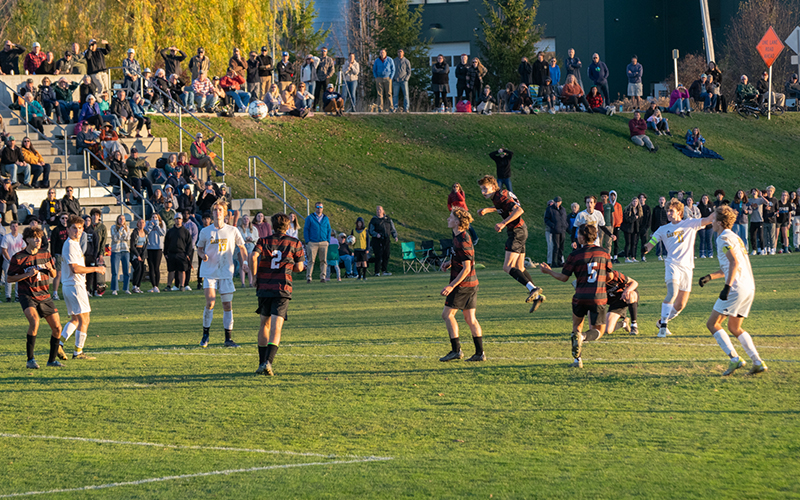 In an exciting semifinal game on Wednesday, November 2, Harwood’s boys’ soccer team defeated Middlebury Union 3-2 in overtime. Harwood got on the board first with a goal by Jordan Shullenberger in the first 90 seconds of the game. Shullenberger scored again off a penalty kick, bringing Harwood up by two after the first half. In the second, Middlebury responded off a penalty kick then again with a set piece goal. The score was 2-2 after regular play. Harwood went on the offensive in overtime and senior Xavier Brookens sailed a shot over the Middlebury goalie after a hard-fought battle, bringing the Highlanders to face Montpelier in the D2 championships on Saturday, November 5, at 10 a.m. in South Burlington.

Harwood’s girls’ soccer team fell to Mt. Abraham in a hard-fought 2-1 playdown game in overtime on Friday, October 28. The game was scoreless at half time. Harwood’s goalie Ciera Fiaschetti made a hard-charging save that ended in a collision. A high bounce went over Fiaschetti’s head but she dived backwards and rolled into the net while managing to scoop the ball away just before it crossed the line.

In the second half, Harwood took the lead when Eloise Lilley scored off a touch pass by Quinn Nelson in the box. Harwood controlled play most of the second half, earning five corner kicks and generating a number of opportunities but wasn’t able to extend the lead.

With just 3:03 left to play, Mt. Abraham got a breakaway on a counterattack and evened the score. About three minutes into overtime, Mt. Abraham scored off of a header. Fiaschetti played the entire game for Harwood in goal and had nine saves. Maeven Cattanach and Quinn Nelson were standouts on the Harwood attack with sharp passes and winning many tough 50/50 balls. Addey Lilley, Addey Olney, and Sadie Nordle were standouts on the Harwood defensive end.

Harwood’s boys’ soccer team defeated North Country 2-0 on Saturday, October 29, to progress to the semifinals at Middlebury Union on Wednesday, November 2, at 3 p.m. as The Valley Reporter went to press.

Nick Moran scored off a pass from Cole Hill 20 minutes into the first half. In the second half

Jordan Shullenberger scored on a penalty kick. Harwood goalie Liam Combs had one save while Harwood coach Joe Yalicki said North Country had “12 amazing saves for their keeper. We played well and kept the ball. We played with good possession and made smart decisions. Wednesday’s game will be even tougher.” Harwood’s record is 14-2; Middlebury’s is 13-2-1.

The Harwood field hockey team had a close 1-0 loss to Lyndon Institute last Thursday. “We had a great season, we played one of our best games of the season against Lyndon in the quarterfinal,” said coach Katie Martin. “We had recently played them and lost 5-1, but we came back after multiple people out sick, concussions, and other injuries to have a close 1-0 game. We had a few great opportunities to score, but we couldn’t sink the ball in the net.

“Players that stood out include senior assistant captain Amy Cook, who had her best game of the year. She never gave up and was instrumental in our game. Our other senior captain Kate Goodrich was, as ever, our anchor on the midfield line. We will miss our seven seniors, all of whom are starters -- captains Chloe Joslin, Kate Goodrich and Amy Cook. We will sorely miss Molly Caffry, a second-year player who was our lead goal scorer this season, was amazing! And our top defenseman, Lindsey Bigelow, who missed a majority of the season with a bad head injury -- I couldn’t have asked for a better leader and example for my defensive unit to have than her. Emma Hans, our last playing senior was new to us this year on the midfield, she was awesome, and it was great to have her on board. We will miss our awesome team manager Liv Cyr as well for all her help and running the book this year.”