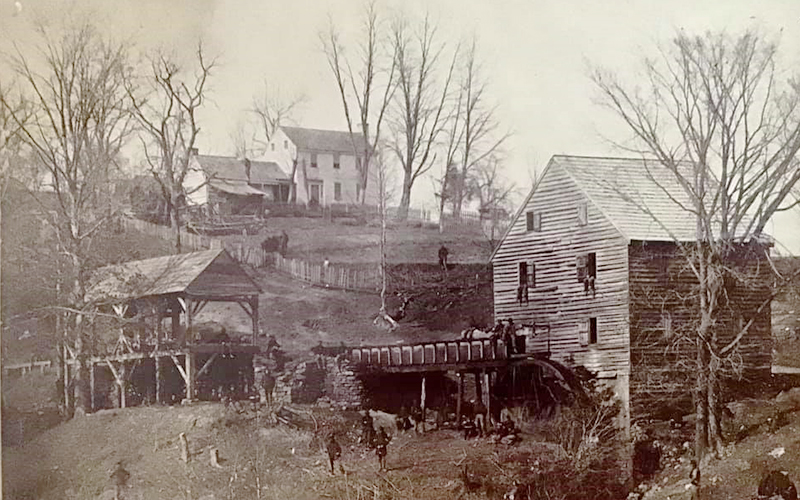 In this final essay of the series “In Search of Waitsfield Soldiers in the Civil War,” the focus will be on the 13th Vermont Volunteer Infantry’s crucial role in the Battle of Gettysburg. When that regiment was mustered into federal service in mid-October 1861, it included 30 Waitsfield men, all in Company B. That company included men whose surnames still appear in The Valley: Baird, Barnard, Dana, Davis, Dewey, Dumas, Heath, Hines, McAllister, Palmer, Parker, Reed, Richardson, Stoddard, Thayer, Whitcomb and Wilder.

The 13th VT passed most of its 90-day term of service in “quiet duty” -- guarding railroad properties and river crossings -- before the unit was ordered from its camp in late June 1863. As their march began, some expected the regiment was headed to Washington, DC, to board a train that would take them back home to Vermont. In fact, their regiment was being rushed to join the First Army Corps then marching into Maryland.

While some in the regiment had hoped to serve out the short balance of their enlistment uneventfully, many looked forward to finally entering the shooting war.

On June 18, Lincoln had ordered George Meade to replace Joseph Hooker as head of the Army of the Potomac, and Meade was swiftly consolidating that army’s two wings in a move northward that would keep it between General Lee’s army (headed, it seemed, towards Harrisburg, PA) and the nation’s capital.

Four Waitsfield soldiers had died of disease and two had been discharged for disability before the regiment began its march on June 25.

Edwin Palmer kept a diary throughout the march. On day one the regiment covered almost 30 miles, the final eight in steady rain. Over the next several days it moved through Centreville, Herndon Station and Guilford Station in Virginia, crossed the Monocacy River and halted briefly at Frederick, Maryland, for re-supply. Exhausted men fell by the road, to be picked up (if lucky) by a regimental supply wagon and carried forward to the next overnight resting place. Some men’s shoes wore through, leaving them partially barefoot as their companies hurried along.

Accelerating the pace, the regiment camped some two miles south of the Pennsylvania border on the night of June 30. On July 1 the 13th was rotated to the head of the march. Nearing the battlefield, it led the Second Brigade across Marsh Creek and Plum Run and camped atop Cemetery Ridge. The 13th Vermont had marched about 126 miles to arrive there.

The next morning the men were ordered to a new position on Cemetery Hill. They soon found themselves exposed to hours of cannon fire as Confederate artillery consistently overshot the Union front line. Then a short pause before Confederate infantry attacked. With four other companies of the regiment, Company B charged down the west slope of Cemetery Hill, deploying to fill a breach in the federal line. The rebels before them scattered even as a major Confederate attack opened over to the regiment’s left, on Little Round Top. Waitsfield’s Edward Fisk was severely wounded that day when a shell fragment struck his right knee.

Early in the afternoon of July 3, the 13th VT Regiment, with the 14th and 16th regiments, lay two hours under heavy artillery fire before being ordered forward to a low spot between the contending batteries, about midway across the battlefield. There they constructed a breastwork from low brush and old rail fencing and watched as Longstreet’s corps formed up to advance against the center of the federal line.

Two Confederate brigades that had been assigned to protect the right flank of George Pickett’s advancing division were lagging behind the latter. General Stannard saw his opportunity. He gave a complicated change-of-position order that placed his men on Pickett’s flank. It was a slaughter. When the survivors among Pickett’s men (who had continued moving in their intended direction) had passed on, Stannard ordered a maneuver by which his regiments turned to shoot into the left flank of the slower-arriving Confederate brigades. Again, the men did deadly work.

Samuel (“Jack”) Dana, Dexter Parker, John Richardson, Dorric Stoddard and Lathrop Stoddard were slightly wounded that day but they each returned to the firing line after receiving first aid.

A large monument on the Gettysburg battlefield commemorates all the Vermont units present during the battle. Nearby stands a separate monument to the 13th Regiment, as well as a position marker accessible by a narrow path which the Park Service keeps mowed in a grassy field.

When Albert Barnard was discharged with his mates on July 21, he already was suffering from fever and exhaustion. He died in his family home on North Road three weeks later.