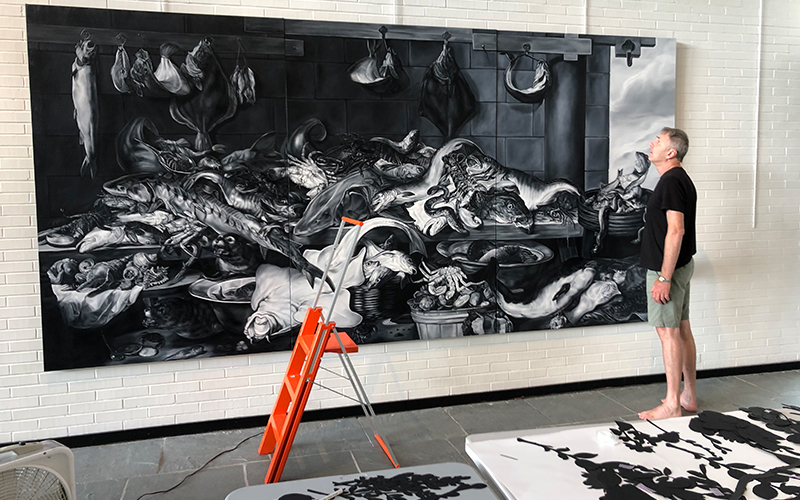 The Bundy Modern, by itself, is stunning with its enormous soaring glass walls and its multi-story exhibition spaces. Add to that intricate hand-cut installation art that runs top to bottom on two walls and huge, oversize baroque or medieval paintings on two walls and the visual impact is breathtaking. This year’s exhibit at the Bundy Modern, “To Market” featuring paintings by Shelley Reed and cut paper installations by Randal Thurston, opens at the Bundy Modern in Waitsfield on June 24 with a reception from 5 to 7 p.m.

Arriving  last week for a preview of this year’s show, this reviewer spent a few minutes outside with Wendell Anderson who, with his wife June Anderson, owns the gallery. While dog visitors played on the lawn and near the pond with their dog, Nico, a ladder was visible in the foyer of the building -- a tall ladder.

Just inside the door of the gallery, Thurston was found, high up a ladder, adding black paper cutouts to the piece of installation art he was working on. He came down for a few minutes to talk about his work.

For his installation pieces, he cuts the individual parts from 100% cotton print-making paper which weighs 300 grams and, as he said, has a lot of body to it.

“In a way, this becomes sculpture; the work is animated. The paper has a certain body to it and it has a kind of memory to it so the cut pieces can stay up like this for six months or a year and when it comes down it gets put in a flat box and settles into being flat again,” he said.

The pieces appear three dimensional from some angles, with the heavy paper curving as well as casting shadows.

This first installation at the Bundy Modern is the third iteration of this particular piece and each time Thurston installs it, it is adapted to its new surroundings.

“When I come to a place I have an idea of what I can work on, what it feels like but  not what it will look like. That happens on site. With this piece I have a bit of a memory about the rhythm of it. It’s interesting to see how it’s adapated to this space which is pretty unique,” he explained.

“When we were beginning to have discussions about this show, Shelley and I came up in winter and Wendell and June took us for a walk down to river through the woods which really stuck with me. It was an hour-long amazing brief jouney. I thought about it a lot between then and being here now. What I was trying to do was create a work that responded to that place as memory, but was also a physical location. Part of what I do is very visual but a lot of the layering has to do with being in nature,” he added.

“Although this seems a little archaic, what I do is make a lot of different size paper cuts because in this place there are a lot of different vantage points,” he said, noting that the front room piece is responding to view outside, while center room installation responds to its view as well as the oversize paintings by Reed.

He said he’s trying to create a call and response, a bit of intimacy that pulls people closer. And it worked on this reviewer who kept backing up to take in the entire piece, but then being drawn back in to examine a detail or a shadow.

The work in a main gallery space is full of silhouettes of Kingfishers, appearing on what look like branches but actually represent vines. There’s a darker quality to this piece, framed as it is by Reed’s rich, redolent paintings.

“I think about music a lot when I’m working. There’s a cadence to what I’m doing. This piece is chord-based,” Thurston said.

“My work engages the space it’s in and anything else around it, so when I’m working with Shelley here, there is a flourish and baroque quality to her work and my work is darker,” he explained.

Reed’s works resemble the work of Old Masters, full of ripe, rich edibles, stacked high in enormous paintings, two of which fill one side of the gallery wall.

“I think we have a real love of nature and there’s an aspect of mortality in both of our work that is not necessarily dark, but the idea of temporality is a big thing for both of us,” Thurston said.

“How we find artists here is usually pretty random. If we ran an art gallery that was not at the Bundy, we’d never get Randal and Shelley. This space allows us to punch above our weight in terms of experience and curation,” Anderson said.