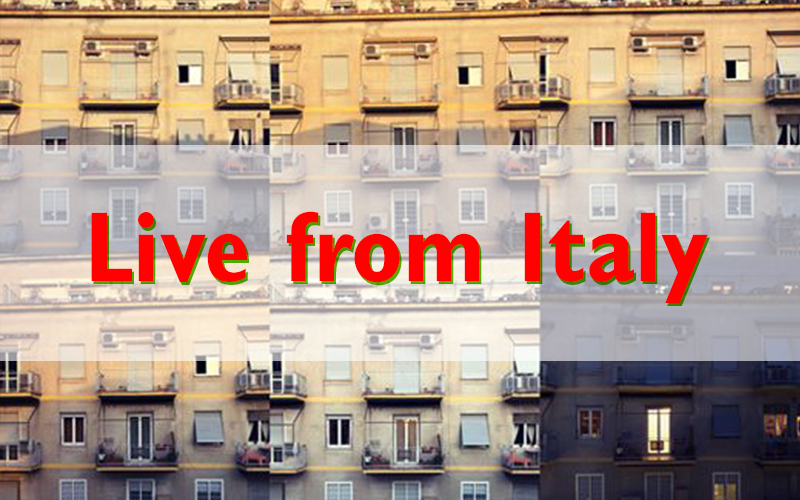 March is finally coming to an end; it feels like it’s lasted a season, not 31 days. Last week we set our clocks ahead an hour, something in which Europe always trails the U.S. My siblings and I enjoy the illusion of being one time zone closer. Five hours, not six, separate us. One would think it wouldn’t make such a big difference, but it does, sort of like those three weeks in summer, just after our July birthdays and before his August one, when my eldest brother gloats at being just five years older than I am, not six; being two years younger than our older sister, not just the one. It’s an illusion, but it feels real. This year, unlike any other, the extra hour of sunlight weighed heavy on all of us here in Italy. The last thing we needed to feel right now was that our days were getting longer, that we were missing out on one more hour of sunlight.

Twenty-one days ago today, our lockdown started in Rome. It was my first day back in Italy after an extended 12-day stay with my daughter in London. I’m glad I came back before the lockdown order. Italy was indisputably late to cotton on to the gravity of the situation. The video promoting Milan posted by city and regional governments, and Lazio and Rome’s invitation to tourists to still come to Rome, both published on February 27 and both of which I regrettably reposted on February 28, were myopic, uninformed and reckless as well as, as the behavioralists are telling us, prime examples of our collective inability to believe the unseen. And, yet, I’m still comforted by how this government continues to communicate with clarity and transparency in regard to measures taken. On March 25, in response to criticisms of how the country has dealt and continues to deal with the pandemic, Prime Minister Conte quoted “The Betrothed,” Alessandro Manzoni’s epic novel describing in excruciating detail the 1629 plague of Milan. “Graves are filled with hindsight.” Hard to argue with that.

Sorrow and grief come in waves interspersed with other ways to distract the mind and body. This past week has been pretty heavy. Last Sunday night, my dear friend announced that her husband, in a home for memory care patients, had coronavirus. She would not be allowed near the facility much less near him. Her children – all but one living in the UK – could not come back to be with her. Over the course of the coming few days, she learned the caregivers at the facility were staying there with their residents instead of going home to their families. Midweek, we found out he was being “kept comfortable” while the home was testing their caregivers, 14 per day. On Wednesday, seven of those tested on Tuesday resulted positive, including the founding director. On Friday, her husband died. Yesterday, at 4:45 p.m., her friends and family, each in our own homes, in various countries, lit a candle as he was cremated in the presence of no one. That this continues to happen each day by the hundreds, especially in the north, cannot not have an effect on one’s emotional health.

And so it was I began thinking of my parents and when I might see my father again, whose own Alzheimer’s is keeping him blissfully unaware but robbing the rest of us of his philosophical, poetic and irreverent pearls of wisdom. We look at him across the computer screen, he waves and blows kisses, and we’re left to imagine what he might say in the face of it all. I know it would have to do with our embracing our humanity and loving our neighbor now more than ever. He would say now is not the time for grudges; he’d tell us to look for what we have in common with our enemies, not what divides us. He’d say, “Write about it.”

Each day our news conferences inform us that hundreds are still dying daily: 837 since yesterday, March 30. Yet, the number of new cases decreases. It seems containment is working. We’re implored by officials to stay the course; the penalties are steep for those who don’t. So, I’m all in. In order to absorb the ups and downs, I maintain sanity by following some basic principles of self-care:

1. I practice both self-discipline and self-acceptance. For instance, a large bag of blue corn tortillas lasted me 10 days. It would have lasted even longer, but I caved last night and continued with the chips long after I’d finished the guacamole. So, I was disciplined down to almost the last chip. But I accept that I will sometimes cave.

2. I structure my day – something that is crucial for survival. Not having structure will lead to deeper despair. Some great tips from self-care advisory groups like Mondo Equilibrio include creating time to do what you’ve always put off; making sure you stay informed but not obsessively so, keeping your “news time” to once or twice a day; staying physically active while also allowing yourself to just be still, something those of us raised within the Puritan work ethic, have a difficult time doing. I sleep in and go to bed late, but during my waking hours I clean, cook, wash clothes and dishes, read, walk, dance, do yoga, write, connect with others and maybe watch a movie or a series but strictly only at dinnertime or after, never during the day. The days, even with that extra hour no one appreciated, seem to fly by.

3. It takes me 38 5-foot-2-and-shrinking steps from my far window in the living room to my front door, including a foray into the kitchen. I live in an open-space loft with no terrace or balcony. As much as I love my apartment, I miss having a terrace or garden now more than ever before. I lose patience when I hear anyone with a yard complain and yet I still consider myself lucky (more on that later). Almost everything except my en suite bathroom is visible from every vantage point. To walk or dance or skip or prance or lunge or sashay those 38 steps over the course of an hour racks up between 3.5 and 4 kilometers, some days more. I’ve been doing this to soundtracks: “Jerry Maguire,” “Philadelphia,” “Chef,” “Pulp Fiction.” I have a bottomless list of tracks to get me through the next three weeks. Yes, because it was announced last night that it will be at least another three weeks before I leave this apartment.

4. I’ve heard neighbors fight and squabble and make up. I learned that there’s a body-building couple living across the way. I’ve seen wives cut their husbands’ hair outside on the balcony, a woman come home with a newborn, and an elderly couple sit outside their door in the sun. The grocer, just two doors down from the Tabaccaio, was surrounded by a news crew on Saturday afternoon. I happened to be in line outside, one meter away from any other soul, ski gator pulled up over my nose and held in place by my sunglasses, not a look you’d ordinarily like televised. Someone hollered from a terrace above, “Where and when will it be shown?” “Live on Rai Uno,” the journalist replied. Speculation rose along the line as to what time it would be on. “They just said it was live, that means we missed it,” says one person. “It’s over and done with,” I add. Others claim that’s not what “live” means. I decide to sit this one out.

5. I plan healthy meals so that nothing goes to waste without becoming a blimp in the process. Until the lockdown, Italians would be flooding the wine bars and restaurants, pizzerias and coffee bars. Ordinarily, I’d have two to three aperitivi per week, that wonderful invention of meeting friends for a long after-work before-dinner drink with hors d’oeuvres that inevitably goes on for hours and becomes dinner (thus the creation of a new term, apericena, which mixes aperitivo with dinner, much in the way breakfast plus lunch equals brunch). Now these take place over Zoom, each of us in our own kitchen. Because Italians never drink without food, I’ve been keeping a supply of avocados and cherry tomatoes for guacamole or salads, olives and some cheese to pair with pears for these occasions. For my solo dinners, I make soups and pasta sauces easily eaten the next day. I’ve had baccala (codfish) in a simple tomato sauce with capers and garlic over pasta once a week. I made lentil soup which, on reheating the next day, I spiced up with some fresh chilis and made a curried rice to go with it. A hidden box of poppadum in the cupboard became a moment of joy. I fried three of them up and had them with Indian pickled lime that I had in the back of the fridge. I’ve also made spinach and ricotta pies every week and last week I made rye bread, half of which is still in the freezer.

6. Connection: I speak to friends and family regularly, host a Virtual Decameron on Facebook, have begun working on writing projects locked away for someday when I’m less busy – it seems the universe had to stop for that to happen.

7. As of this week, neighborhood groups are forming to help those in need: freelancers, contractors, people who have no income if they are not working. A local bakery, for example, is wrapping bags of fresh pizza and bread that wasn’t sold by closing and putting them out on their front steps at closing, trusting that the community will let those most in need have first pick. Restaurants and pizzerias are taking orders “in sospeso,” which basically means “suspended” for someone else. Some people are prepaying dinners and overnight stays they hope to have in future, just to keep their favorite places going. I’ve volunteered to help coordinate.

8. Taken from March 20 but still true, despite all of this, I’m lucky. If I think of who has lived and continues to live in a perennial state of migration, seclusion, flight, lockdown, how can I possibly complain? I love my apartment. I can open all the windows and it's almost like being outside. I open the faucet and drinking water comes out. I have two computers and a smartphone and 24-hour connectivity. I can choose to use one computer only for entertainment. I discovered I have more pillows than I really think are necessary, but I love them all. I can turn the heat on and off as needed. I have food and drink for not just substantive meals but really good ones. I have all the toilet paper I'll need for at least another 20 weeks. I can walk thousands of steps in my apartment while talking on the phone. I have more books than I could ever read, but I now have time to try. If all that's being asked of me to save my life and that of others is to stay home, I am really, really lucky.

Tina Marisa Rocchio was born in Burlington and lived in Warren until she was 14. She went to Warren Elementary School and HUHS before going to boarding school, returning home to Vermont on school holidays. Prompted by her love of the Italian language, at 18 she went to study for a fifth year of high school at St. Stephen’s School of Rome and the rest, as they say, is history. She’s been living in Italy for over 30 years where she raised her daughter, Giulia, who now lives and works in London.