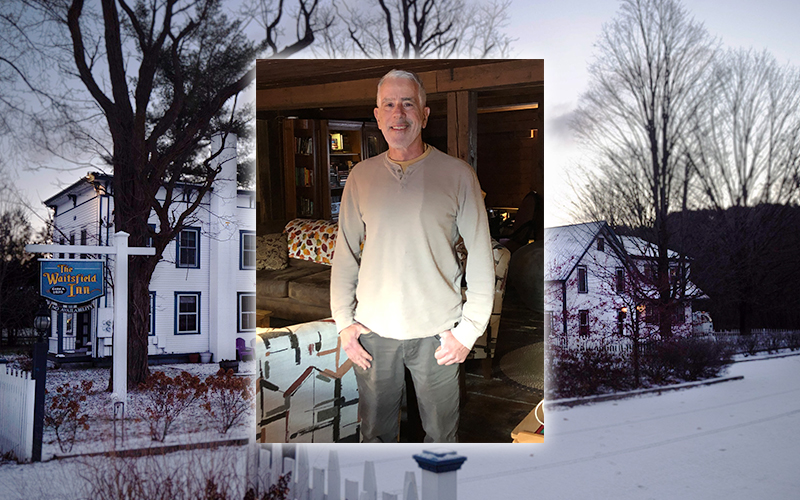 “I’ve always wanted to own an inn,” explained Frank Giubardo, one of the new owners of the Waitsfield Inn.

He lived in Hawaii for a time and regularly visited the West Coast, including the ski town of Truckee, California, where he found an inn he loved and vowed to buy something similar when the opportunity arose.

Fast forward to some six years ago when he ended up in Fayston with a few stops in between.

“What really pushed me to find a place was that the house I was living in got sold. I told the realtor who was selling it to start looking for something for me. When the Waitsfield Inn popped up on my radar screen, I walked in the front door and could see a café, restaurant and inn in downtown Waitsfield in a ski town,” Giubardo said.

Giubardo and his son BJ are partners in the inn business as well as a flooring and construction business they operate with BJ’s wife Natasha in Burlington, Connecticut, and they also have a retreat business in the Galapagos.

“We’ve been really busy, and we’re learning about the building and the business. There’s an added bit of difficulty in that we haven’t been able to hire anybody so we’ve been up at 5 a.m. making beds, turning rooms and making breakfast then out the door to Burlington for a flooring meeting,” he said.

He said that the inn business had been very good and that he was working on creating a plant-based café and restaurant and hoped to do retreats in the future. He’d planned on buying the adjacent building that formerly housed The Store to host retreats, but a new buyer stepped in before he could close.

“We have lots of plans and ideas and guests seem to like the direction we’re taking it. We’re totally committed to the community,” he said. Giubardo said he is providing housing for some of Sugarbush’s H1 and J1 visa employees in his bunkhouse this winter and will likely continue that this spring and summer.

Giubardo grew up in Brooklyn and Long Island, New York. He road his bike across the country in the 1970s and lived on the West Coast for a while before marrying and moving to Hawaii where he first got into the flooring business.