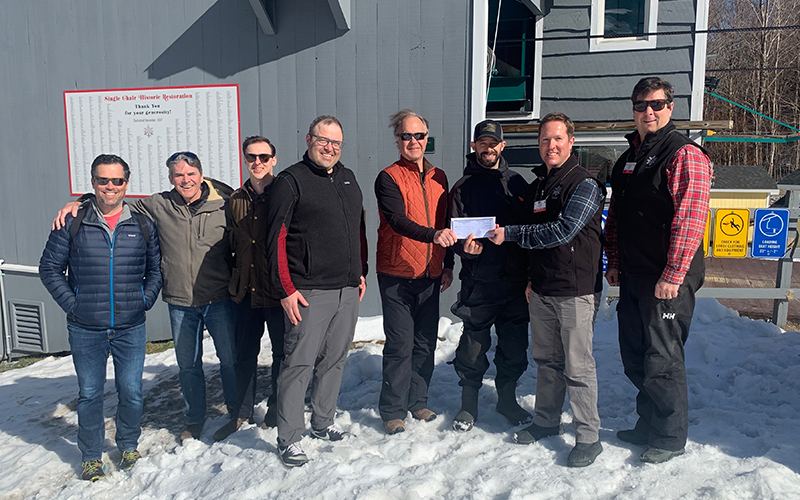 The Mad River Glen Cooperative presented a donation of $20,000 to Win Smith, board member, and Chad Borofsky, executive director and board member, of Three Peaks Medical Clinic. Matthew Milan, the president of the board of the Mad River Glen Co-op said “The cooperative is very glad to be able to support the Three Peaks Medical Clinic. It is a valuable addition to The Valley and will be a great resource for Mad River skiers also. When it came before the board, it was a no brainer.”

Making the presentation were Matt Lillard, the general manager of Mad River Glen and Andrew Snow, finance and business systems manager, along with Milan and other co-op board members. Matt Lillard said that when it came to his attention that the clinic was raising funds and would also serve Mad River Glen skiers (as well as Valley residents), he felt that it was something that the co-op should do to be able to support The Valley and Mad River skiers.

“It is a much-needed resource and will in many cases, save an injured party from having to make the 45-minute ride to Central Vermont Medical Center in Berlin,” Lillard said

The clinic is scheduled to open December 15, 2022. The clinic will be an orthopedic clinic and will be located next to the Sugarbush Patrol Aid Room in the Claybrook building at Sugarbush Lincoln Peak. It is named after the three peaks of Lincoln Peak, Mt. Ellen and Mad River Glen. Information about the clinic can be found at: www.threepeaksmedicalclinic.org.