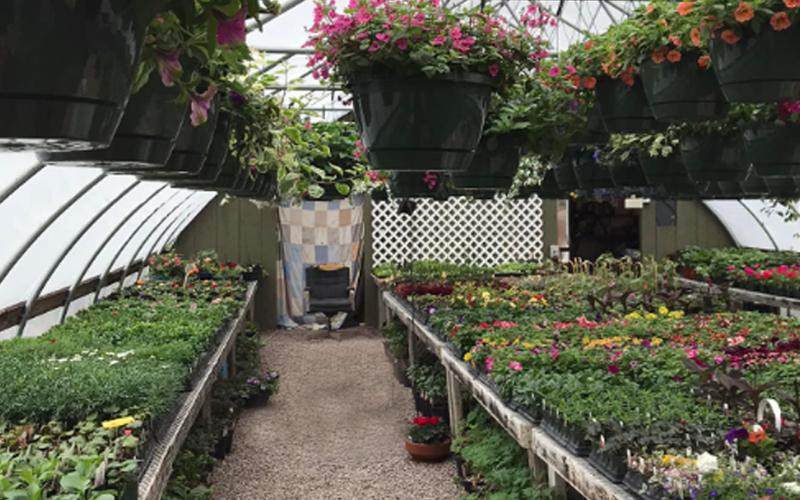 Many Valley gardeners’ worlds were rocked last year when Sally and Tobi von Trapp announced that it was their final year in business at the von Trapp Greenhouse in Waitsfield.

As local gardeners make plans for their tomato plants, annuals and hanging baskets, other local purveyors of plants are stepping up to fill that void.

Hadley Gaylord of the Gaylord Farm in Waitsfield will be selling seedlings at his farmstand and also at the Waitsfield Farmers Market, starting May 14. He’s going to be selling four packs of plants and well as individual pots. He’ll start selling plants that are hardy and gradually add more as the threat of frost passes. He said he’ll up his game a bit to help fill the void left by the von Trapps.

Jenna Rossbach at Fancy Plants Greenhouse in Moretown is also upping her game. Her greenhouse opens this weekend and she’ll have everything people need, she said. She’s offering a full array of vegetables as well as annuals, succulents and some hanging baskets.

“Tobi and Sally have been really awesome, helping me learn how to do all the stuff I’ve never done before. They’ve given me equipment, two large cold frames. Sally had a yard sale last fall and gave me a lot of hanging baskets, tons of plant hangers. They’ve been so helpful to me,” Rossbach said.

Rossbach, who has provided landscaping to a few clients in the past, is going to drop that this summer and have her greenhouse open six days a week from 9 a.m. to 4 p.m., closed on Tuesdays.

“I’d always planned on slowly getting bigger over time. I would not have made this big jump without them retiring so it’s a little faster than I’d planned, she said.

This year Rossbach has individual pots and will have plant plugs so people can make their own six packs of plants. She’s also got some peat pots which root through the pot and the whole thing gets planted.

“I’m excited for the season,” she said.

Vee Lynch at Vee’s Flowers in Waitsfield is adding as much to her offerings as she can. She’s sourcing organic vegetable starts from Red Wagon Nursery in Hinesburg and annuals from Paquettes and Clausen’s greenhouses along with hanging baskets from those two businesses.

“I’ve also planted some of my own hanging baskets as well,” she said. She’s got frost hardy stuff on the tables in front of her shops including pansies and onions, strawberries and Brussel sprouts all of which were under 4 inches of snow recently.

Frazier’s Greenhouse in Roxbury has seedlings of tomatoes, peppers, celery, parsley, three to four different types of basil, oregano, and more. “You name it, we’ve got it.” Some seedling varieties come in four-packs, while others come in 4-inch pots.

Evergreen Gardens in Waterbury Center also has many varieties of fruits and vegetable seedlings, including peppers, eggplants, squash, watermelon, pumpkins, and greens such as lettuces, kale, and broccoli and more. Most seedlings come in four- or six-packs, while some are in 4-inch pots and tomatoes and herbs come by the gallon.