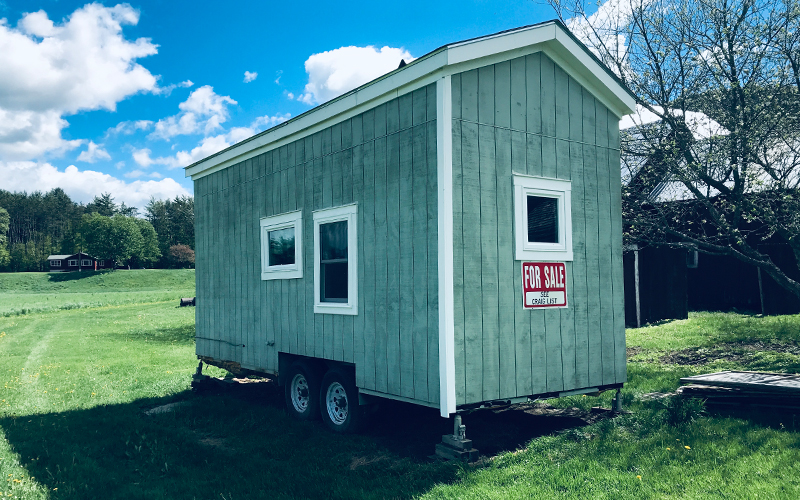 As The Valley continues to struggle with a serious lack of workforce and other housing, it is worth asking what can be done with a tiny house.

Waitsfield resident Fred Messer has a tiny house which he’d like to sell. He said it is not completely finished inside and he ended up with it after a divorce. Messer who has two apartments at his Meadow Road property is not interested in permitting the tiny house for a third housing option.

The house has a composting toilet and could be outfitted with solar panels to be off the grid. Messer likens it to a recreational vehicle that could be towed anywhere.

“Think of it as an RV. It can go anywhere,” Messer said. He said he’s getting regular interest in it with someone looking at it almost every week, but no takers yet.

“If someone wanted to take this and put it on a nice piece of land, it’d be a great Airbnb option,” he added.

But how would that work with local zoning regulations? The Valley Reporter reached out to local zoning administrators seeking information about how someone could site and move into a tiny house.

Waitsfield’s zoning administrator JB Weir (also Fayston’s former zoning administrator) said that someone could buy a tiny house and add it to their property as an accessory dwelling unit (ADU) with the proviso that the square footage needs to be 30-40% of the gross floor area of the principal dwelling. Maximum size could be 900 square feet or 30-40% of gross floor area but people can get an additional 100 square feet by going through the development review board for conditional use review, Weir said.

“It has to be on some type of foundation and hooked up to water and wastewater,” Weir said. Weir said his recollection is that Fayston also requires water and wastewater hookups. He was not sure about the issue of a foundation. Last year the Fayston DRB permitted a tiny house planning unit development featuring three wheeled tiny houses and three on foundations. Fayston currently does not have a zoning administrator and a search of the current zoning ordinance for the term ‘tiny house’ did not yield any results.

In Warren, zoning administrator Ruth Robbins said that Warren has at least one tiny house and that to serve as an accessory dwelling unit, the house needs to be hooked up to the primary home’s wastewater system.

“That’s what makes it accessory to the primary house. A tiny house has to meet the setback requirements but under the current regulations there is no need for a foundation. Tiny houses are not treated like mobile homes which have to have the wheels taken off and skirting around the bottom,” Robbins said.

“If you bought a lot and could get a wastewater system in place and wanted to put a tiny house on it, you could put it on a slab or crawl space or piers if it’s going to be a year-round residence. We’ve got one that is similar in design to the one for George Pakk in Waitsfield Village. They should have some sense of permanence. These are not RVs,” she said.

Robbins said that under Warren’s current land use regulations a new accessory dwelling had to go through conditional use review. Warren is in the process of updating its land use and development regulations and Robbins said under the new regulations if someone is converting a garage or outbuilding to an ADU, she can permit it, and if someone is starting anew, the ADU needs to go to the DRB.

Duxbury zoning administrator David Specht said that the town does not have any tiny house specific provisions but rather all dwelling units must meet the same criteria.

A call to the Moretown interim zoning administrator was not returned and a search of the zoning bylaws for ‘tiny house’ yielded no results.