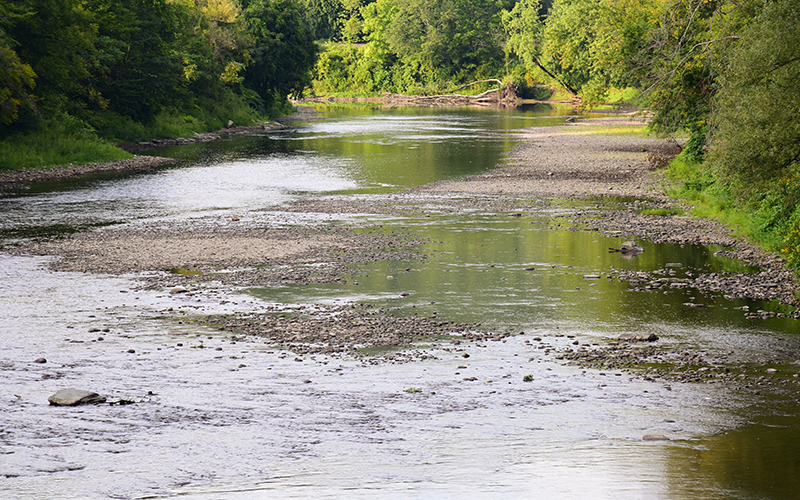 With many hot days this summer, swim holes along the Mad River have been busy and recreators are noticing the river, much like many bodies of water throughout Vermont, has been low. The USGS gage shows the Mad River in Moretown in the lowest quartile based on 93 years of data.

Farmers and home gardeners are reporting less than stellar performance from their gardens this year and Friends of the Mad River, the local river/climate advocacy group sees this year’s drought as a symptom of climate change.

“I don’t think many of us are concerned with the occasional dry days or a few days of rain, but the extremes catch our attention,” said Friends of the Mad River board member Kinny Perot, Warren. “In the broader context of climate change and more intense weather events, drought is the flip side of flooding. Drought doesn’t seem to capture people’s attention since it is incremental and creeps up on us. More extreme events of floods and droughts, increased intensity of winds, have effects on businesses, towns, and schools along with other macro trends such as more people moving to The Valley. We can, together, prepare the local agricultural- and tourist-based economy for these changes while building community with and for all of us, developing new economies and diversity and reduce our own contributions to all forms of pollution.

“In the very near term, it would be wonderful if the next rains that come would sink into the soil instead of running off into the streams and river while taking more soil off of the land,” Perot said. “Keep areas vegetated and able to absorb even heavier rains: get involved in the Storm Smart program to enhance your property for these changes. (https://www.friendsofthemadriver.org/storm-smart.html)”

“Groundwater is important not only for our personal water supplies but for feeding the river (its health and keeping it cool) and the critters living in and around water, as well as plant life and resilience of the entire forest and the animals dependent on healthy forests. Water is a great example of how everything is connected,” she added.

Elwin Neill of Neill Farm in Waitsfield said his crops have been affected by the drought. “It’s dry here and it’s really been affecting us,” he said. He noted that as much as one-third of his fields of sweet corn has dried up and there are patches of hay in his fields that have burned. He’s hoping the second planting will prove more fruitful but said that some of the corn is only waist-high when it should be over his head. “It’s pretty strange,” he said.

At Sugarbush, which relies on a 10-acre pond fed by water from the Mad River, resort spokesperson John Bleh said the resort is confident that there will be enough water by November to begin snowmaking on its regular schedule.

The pond holds 25 million gallons of water, of which 18 million are usable. Currently Sugarbush is upgrading and replacing the existing water withdrawal infrastructure. The pond provides 100% of the water for snowmaking at Lincoln Peak. The withdrawal infrastructure, constructed in 1995, includes a stop log dam, concrete foundation, Parshall flume, and high and low flow intakes to divert river water into the snowmaking pond when flow conditions in the river allow.

The new dam that is replacing the stop log dam is an inflatable rubber bladder, which is beneficial to both snowmaking operations and to the Mad River, Bleh said. The new dam will help provide a more reliable process for withdrawing water and maintaining the snowmaking pond throughout the year. The inflatable dam will also keep excavators and personnel out of the river at the start and end of snowmaking season and will allow for natural river conditions when it is deflated. The bladder automatically deflates during high flow conditions to allow debris such as trees and ice during floods to pass through and can manually occur when flow conditions do not support water diversion into the pond.

“We're confident at this point that we'll be able to replenish our snowmaking pond ahead of snowmaking season (November start). Construction, of course, is still underway on the new weir project as well, which should really help provide a much more reliable process for withdrawing water and maintaining the pond throughout the year,” Bleh added.  The construction activity has a portion of the Mad River Path snowmaking pond on the east side of the pond closed.