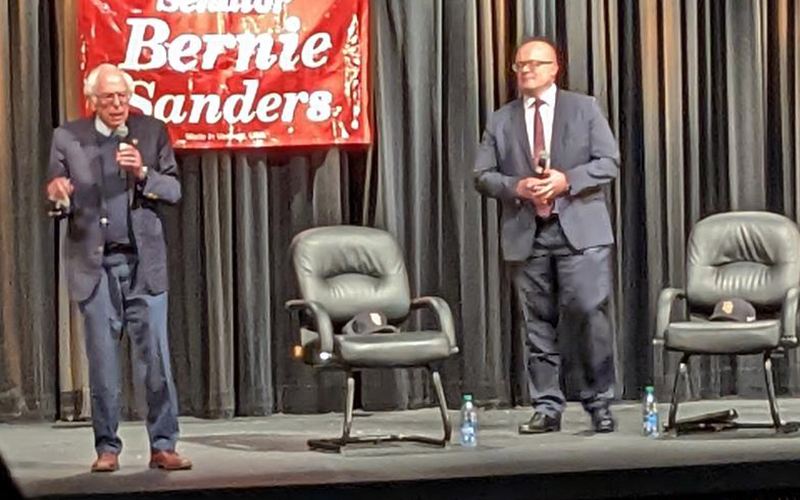 Last week, Senator Bernie Sanders welcomed Finland’s ambassador to the United States Mikko Hautala to Vermont “to exchange ideas about what Vermonters can learn from Finland and what Finland can learn from Vermont on a range of issues, including health care, education, housing, and the environment,” according to a press release. That visit included a town hall at Harwood Union Middle and High School for all students grades seven through 12 on October 20, in addition to a public town meeting in Burlington also on Friday.

Senator Sanders and Ambassador Hautala were greeted with enthusiasm in the Harwood gymnasium. Sanders spoke of the importance of students gaining global perspectives and learning from other countries and commended Harwood’s efforts to expose students to international viewpoints such as through exchange programs.

Hautala explained that Finland has been named the “happiest country on Earth” for the past five years, according to a survey. He cited one factor for Finns’ happiness being consistency, knowing they will get the health care treatments they need and that they will be affordable, for instance, and knowing they can pay for college (which, he explained, is virtually free with some nominal student association fees). Senator Sanders asked the students to share some of their experiences with the American health care system. One student spoke about her family constantly facing problems with insurance paying for her mother’s cancer treatments; another talked about her family having to pay thousands of dollars out of pocket to cover an uncle in a coma; another talked about his father’s lasting effects from COVID-19 and how hard it is to get a doctor’s appointment. Ambassador Hautala spoke about the universal health care in Finland and all citizens’ ability to access the treatment they need.

Hautala also brought up a staffer who had recently had a child. She talked about how Finland offered three month’s family leave at 100% of their salary and partially paid for up to a year. She also said that child care in Finland is based according to income, and at the highest level, is $300 per month.

“They’ve managed to create systems which provide for a better quality of life than we have managed to do,” Sanders said.

Though some students responded by asking about moving to Finland, Senator Sanders said, “Finland is not Utopia. Like every country, it has its problems. It borders Russia,” explaining how the Russian-Ukraine conflict has impacted the area. Hautala said all men in Finland must serve in the military for six months to a year and his friends with children in the military now are very concerned for their safety.

One issue that did not come up in the town hall was climate change. Asked about it during a press conference following the town hall, Sanders said, “The way we’re heading is if we don’t act globally and transform our energy system away from fossil fuels and into sustainable energy, the planet is going to become increasingly unhealthy, uninhabitable. So that is an issue that necessarily these young people need to be deeply, deeply concerned about.”