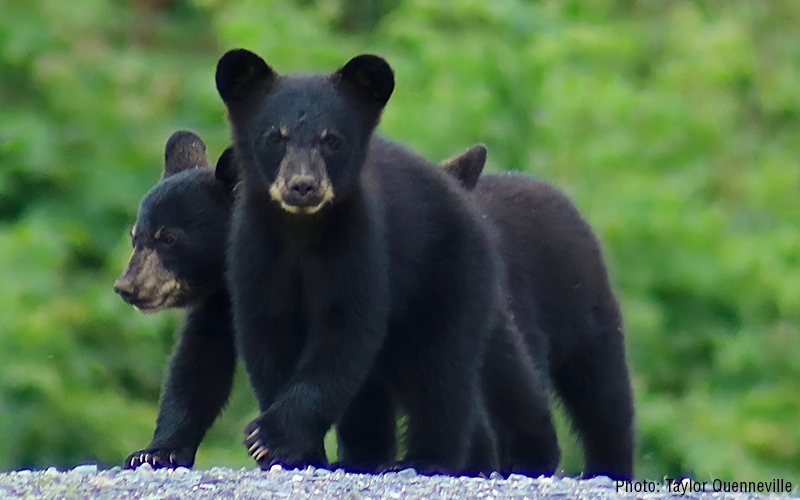 During last week’s presentation by Vermont Fish and Wildlife biologist Jaclyn Comeau, organized by the Mad River Valley Bear Initiative, she noted an increase in human-bear conflicts in recent years. The Fish and Wildlife Department anticipates well over 1,200 such conflicts in 2022, compared to fewer than 500 such instances annually in 2011-2017. “Learning how to better coexist with our black bears is a really important step,” Comeau said.

Fish and Wildlife estimates there are roughly 6,000 black bears in the state. While the black bear population in Vermont was mostly confined to the spine of the Green Mountains and the Northeast Kingdom back in the 1960s and 1970s, the bear population has now been distributed throughout the state. Comeau called the Mad River Valley a “hotspot” for bear activity.

Black bears primarily live and hunt for food in wetlands, young forest habitats and mature forest habitats, seeking a diverse and flexible omnivorous diet. When foods such as beech nuts, acorns and fruit are not readily available in their natural habitats, they seek food elsewhere, such as back yards. With easy access to foods in and around human habitats, bears become habituated and present a lack of wariness and fear around people.

According to Comeau’s well-attended Zoom presentation last week, 45% of human foods driving conflicts in the state are found in garbage, while 15% are birdfeeders, 13% are backyard chickens, 10% compost, 7% beehives, 6% other livestock and 4% crops. “We are providing way too many opportunities for bears to learn to become food-conditioned and habituated,” Comeau said. It is illegal to feed bears in the state of Vermont.

She said the most important way to deter conflicts with bears is to remove food sources from backyards, such as by securing garbage and compost and controlling odors, only feeding birds during the winter (she suggested waiting until at least December 1 to put birdfeeders up), installing electric fences around chicken coops, keeping grills clean and storing pet/livestock food in secure structures. She also said to make bears uncomfortable around homes by making lots of noise (from safely inside) when bears are in your backyard (yell, bang pots and pans, turn on a car alarm).

She also encouraged people to report bear conflicts and repeated sightings with the Fish and Wildlife Department or local game warden and share information about bear sightings with neighbors. Additionally, she suggested using a device such as a CritterGitter, which is a motion-detected device that deters bears with flashing lights and high-pitched noises, around chicken coops or other areas where bears are likely to seek food. People can also reach out to the Fish and Wildlife Department for additional guidance.

The Mad River Valley Bear Initiative has organized a series of presentations on coexisting with bears to educate people. It is comprised of Fayston, Waitsfield and Warren Conservation Commissions, the Moretown Recreation Commission, the Duxbury Land Trust, Stark Mountain Foundation, Friends of the Mad River, Sugarbush Resort and other local volunteers.