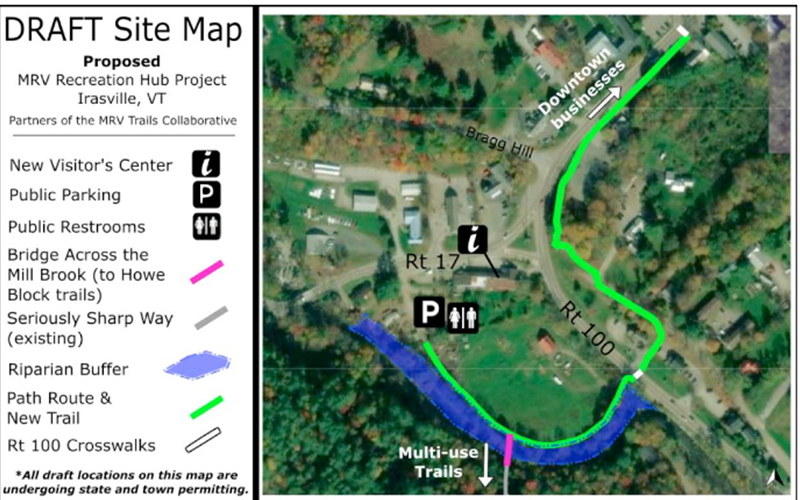 Members of the team working to develop the Mad River Recreation Hub at the Localfolk Smokehouse in Waitsfield will be asking the state for feedback on changing the route proposed to connect the rec hub to Irasville.

This comes after the select board, this week, passed a motion calling for the proposed route from Irasville to the rec hub to be incorporated into a VTrans study of the intersection of Routes 17 and 100.

The proposed route called for a multi-use trail to run along the edge of the field behind the Smokehouse, following the property line out to Route 100, crossing Route 100 between Mad River Outfitters and Mad River Real Estate and running along Dugway Road until it ends. From there pedestrians and cyclists would follow the trail up to the Bluestone parking lot, then along the Route 100 right of way to a location near Addison West where they’d crossover to the Waitsfield sidewalks and Irasville.

The select board motion also urged rec hub partners, including the Mad River Path and Mad River Rec district to pursue other routes to connect Irasville to the rec hub.

The rec hub is being funded and developed by a $408,000 Vermont Outdoor Recreation Economic Collaborative grant. The hub will include a welcome center, information kiosks, a bridge over the Mill Brook connecting the hub to The Valley’s trail network, some route to get to Irasville, parking for up to 80 cars, and public restrooms. The Mad River Valley Chamber of Commerce is relocating to space on the property next month.

The Mad River Path and Mad River Rec District and other members of the rec hub team proposed the route as the most direct route to get people from the hub into town. At this week’s meeting board members urged rec hub organizers to pursue an alternative route that runs down Fiddlers Green and connects to a path along the Mad River that runs north into Irasville, bringing people out at the south end of the Irasville Cemetery.

The select board’s discussion of the route to connect Irasville and the rec hub comes after town administrator Annie Decker-Dell’Isola and Mad River Path executive director Ross Saxton met with Jon Kaplan of VTrans last week regarding a joint application from the town and path association for a Section 1111 permit for the crosswalk connecting the rec hub to Dugway Road.

VTrans will not approve that proposed crosswalk as a crosswalk (which requires cars to yield to pedestrians) due to sightlines for drivers from the north, but rather will approve it as a trail crossing (which encourages drivers to yield).

The VTrans decision coupled with the imminent start of a study of the Route 17/100 intersection prompted Dell’Isola to recommend that the select board incorporate a Route 100 connection from Irasville to the rec hub into that study.

Dell’Isola noted that members of the rec hub team have a final window in which to make changes to the proposed alignment and said that a decision was needed to give them time to reach out to Vermont Department of Forest Parks and Recreation about spending VOREC funds on a different route. The rec hub team has until the end of 2024 to complete the project.

Board chair Christine Sullivan asked for comments from other board members and Chach Curtis sought clarification on whether putting the Route 100/Bluestone/Dugway route on hold would impact whether the rec hub can move forward.

“The potential connection thru Fiddler’s Walk is still a connection,” Dell’Isola explained.

Ross Saxton, executive director of the Mad River Path told the board that the path and rec hub team feels the original proposed alignment is the safest option to get people downtown from the rec hub.

“As the rec hub is developed, we can expect traffic to increase and we’d expect more pedestrian and bike traffic to happen on that curve on Route 100. The existing trail, Fiddler’s Walk, we don’t have 100% official permission to do that and we’d need to work with the businesses in Fiddlers Green in more detail. With that being Plan B, we still want to see the proposed alignment and we have until 2024 to make it happen. We feel like we have a pretty good amount of time to complete the engineering and survey and work out the details with VTrans and the adjacent property owners,” Saxton said.

Laura Arnesen, Mad River Valley Recreation District executive director, concurred that it would take time to see if the rec hub team could use VOREC funds to connect the rec hub to Irasville via Fiddler’s Walk. She also reiterated that people who can see downtown from the rec hub would want to take the shortest route to get there -- the original alignment.

“It’s human nature for people to take the shortest route. Trying to get people to go to Dugway and then down to the end of Fiddlers Green to Fiddler’s Walk – we’re fighting human nature. I look at that as a safety concern,” Arnesen said.

“I’m also concerned about how long the VTrans intersection study might take and what they will decide at the end of it. It might be many years before we could get permits and we could use it successfully for five yeas and if the intersection changes, we could change it,” she added.

“I hear what Laura and Ross are saying. I’m not absolutely opposed to this alignment. I’m concerned about the crosswalk by Claytons and how this crosses the Bluestone property,” said board member Brian Shupe, referring to a privately-owned property south of Addison West.

“I’m open to this route but want VTrans to look at it for safety and alignment. I’m not convinced it’s the safest route at this time. I’m looking forward to the Route 17/100 intersection study. They might even come up with something that’s better for everybody,” he added.

The town expects to have its first meeting with the VTrans consultant undertaking the Route 17/100 intersection study in the coming weeks.