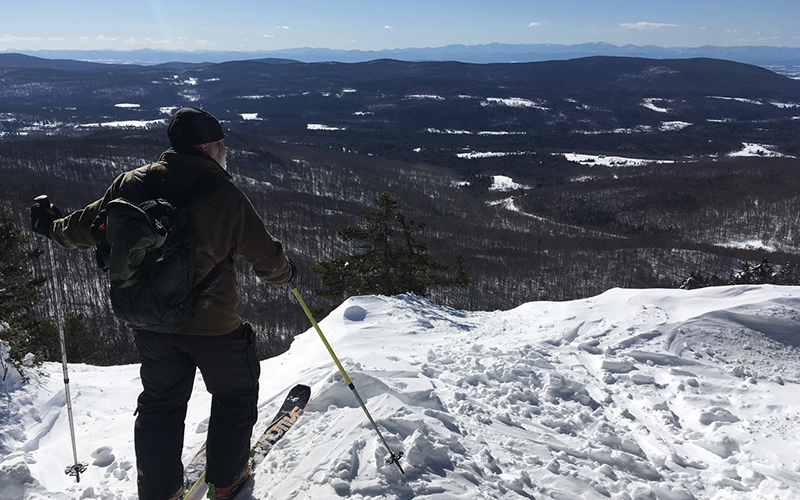 The presentations and following questions centered on two realities: the recognizable increase in the number of backcountry skiers recreating in Vermont and the growing importance of environmental protection with climate change underway.

According to Williams, there is clear evidence that backcountry use in Vermont is higher now than ever before with trailhead monitoring revealing double and triple the use of previous years. As the executive director of the Catamount Trail Association, an organization which aims to expand land and equity access to backcountry skiing, “We love seeing more people in the woods,” he said, “but we also know that creates an impact.”

Herein lies the crux of the issue the forum focused on.

Home to an estimated 24,000 to 43,5000 species according to the state’s Fish and Wildlife Department, Vermont’s ecosystems support biodiverse plant and animal populations. Additionally, studies have shown that with climate change underway, species have begun and will continue to migrate north, following the weather to which they are accustomed. The Green Mountain ridgeline, houses an important natural corridor – a contiguous landscape with low human presence – ideal for facilitating animal migration. As a result, the state is likely to see an influx in plant and animal migrants and transient visitors in the coming years.

For both local and migrating populations, the preservation of these natural corridors is crucial for their survival. However, anytime human presence in the backcountry grows, there is a higher chance these spaces will be damaged and disrupted. Examples of this include vegetation destruction from cutting, trampling, and brushing against fauna and disruption of animal migration patterns and feeding behaviors.

In winter especially, where snowpack is already noticeably weaker due to global warming, these human impacts are exacerbated as people seek the same climate refugia – places naturally protected against climate change – that snow-adapted animals such as lynx and snowshoe hare are increasingly dependent on.

This reality makes it important, now more than ever, to address these spaces of convergence between human recreators and the animals they disrupt.

So, how does Vermont do that?

While perhaps contradictory to the allure of the “explore anywhere” aspect of backcountry skiing, sanctioned backcountry ski zones represent an important strategy to limit human disruption in natural spaces, participants noted. Recognizing that an inevitable amount of disturbance occurs when skiers are out in the backcountry at all hours of the day, these ski zones would establish deliberately planned and designated areas for recreation with pre-approved vegetation removal and designated climbing and descent options.

For other frequented, pre-existing places, however, simple measures could be implemented such as time restrictions on trailhead use to allow windows for unimpeded animal movement or designated skin-tracks to service marked descents aimed at protecting vegetation habitats that skiers frequently, though inadvertently disturb.

A testament to efforts aimed at preserving and protecting natural spaces and their inhabitants, these management possibilities are increasingly important to protect shifting ecosystems in a warming climate, participants learned.

At the end of the day “the decision to not manage, is a management decision itself,” said Matt Williams, and through the creation of more managed spaces, the hope is to balance out scattered backcountry use with more concentrated sanctioned ski zones – all with the intention of protecting forest structure and biodiversity.

A recording of this forum can be found online at mrvtv.com.