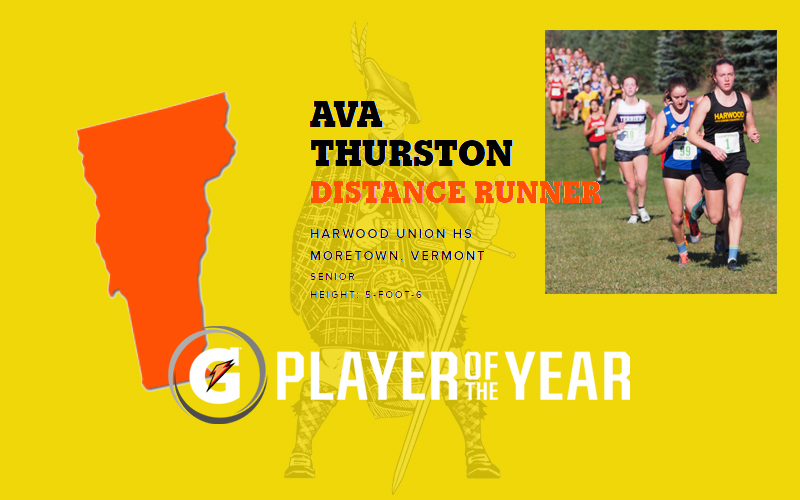 Harwood Union High School senior Ava Thurston, Waterbury, was named the 2021-2022 Gatorade Vermont Girls Cross Country Player of the Year. This is her second time receiving the honor, having first gotten it in her sophomore year, and she is the first Harwood student to be selected. “It’s a pretty big honor,” she said. “It felt really special this year. The team was so good, more focused. It was a tough season.” Thurston, team captain, led the team to the state championship, where she took top place.

“Ava is the first runner in the history of Vermont high school cross-country to win the girls’ Division II championship in four consecutive years,” said longtime Harwood cross=-country coach John Kerrigan. “What sets her apart, however, is that her number one concern has always been the finish of her team.”

“Harwood cross-country is hands-down one of the best things of my Harwood experience,” Thurston said. “Kerrigan is a great coach … he really cares about everyone on the team. This year was really amazing. Everyone worked so hard. The team clicked, everyone got along really well. (Harwood’s) girls’ cross-country has been super strong for so many years. It’s a testament to Kerrigan and all the girls who came before me.”

In addition to the title of state champion, Thurston, 18, also won Vermont’s Meet of Champions and placed third at the New England Championships. “New Englands was a huge highlight” of the year for her. “The best part was we were really adamant about getting spectators since it was in Vermont (at Thetford). We managed to get a spectator bus and about 50 (Harwood) students came to watch and support us. Our team did really well. We were trying for top 10 and we got top five.” The team took fifth place; the best Harwood has ever done in the race.

The Gatorade award recognizes not only outstanding athletic excellence, but also high standards of academic achievement and exemplary character demonstrated on and off the field. Thurston has maintained a 3.87 GPA in the classroom. “In my years at Harwood I’ve been able to take a lot of cool classes,” she said. “AP Lit is a class I really love.” She’s also enjoyed taking classes on “race in power” and economics and favors social sciences. Though she’s not sure what she wants to study in college, she particularly loves her English and humanities classes. She also took an independent study in philosophy last year and has taken college courses at UVM and CCV in psychology and statistics. She hopes to receive a liberal arts education in the Northeast and has applied to UVM, Middlebury College and Dartmouth. She wants to participate in sports in college but is not sure if that will include cross country.

Also, an avid Nordic skier, she thinks she may focus on skiing first, though says running has certainly helped with her fitness. She hopes to compete in more international races, having placed 14th in the junior worlds Nordic skiing competition in Finland, and maybe even join the U.S. ski team in the future.

Thurston is now a finalist for the prestigious Gatorade National Girls Cross Country Player of the Year award to be announced in February.