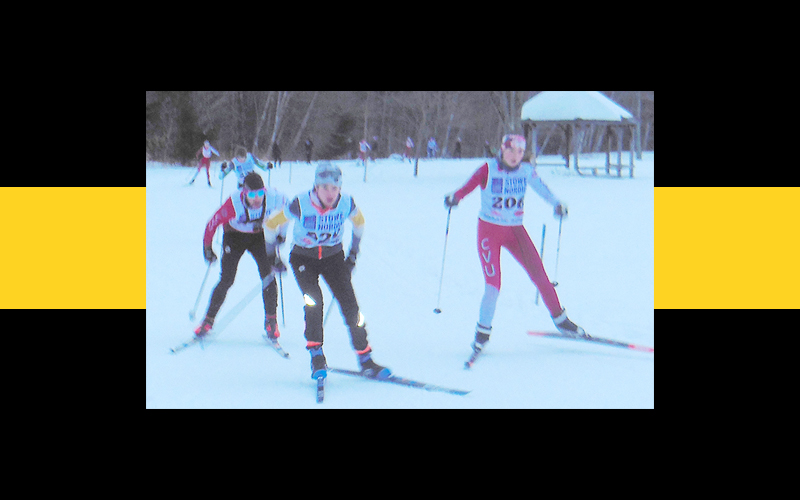 While temperatures in the low 30s might connote soft, pliable snow, a damp chill in the air and the disappearance of the warming sun behind a bank of grey cloudiness produced race conditions that were surprisingly firm and fast. The result was a spate of especially speedy times on the 4.5-kilometer loop raced by the high schoolers, with the middle schoolers competing on an abbreviated loop.

Vermont high school cross-country racing for the last couple of years could be considered the Age of Ava, as in Harwood’s Ava Thurston. She is an elite talent, having competed internationally as a member of the U.S. under-18 team, and she is very familiar with winning high school races, often by large margins.

But Tuesday at Ole’s was not Ava’s time to stand atop the podium. Instead, she had to settle for a close third, behind Emma Crum of CVU and sister and Harwood teammate Julia Thurston in a three-girl breakaway group. A possible reason for Ava’s non-victorious result, according to Harwood coach Tom Strasser, might have been that she had spent the weekend racing hard in Craftsbury against many of the best skiers in the country not currently at the Olympics. She more than held her own at Craftsbury, but that effort might have sapped the energy needed for a fully-committed effort on Tuesday at Ole’s.

Finishing third (and 27th overall) for the Harwood girls was Tessa Jernigan, leading to a third-place team finish for the Highlanders, behind perennially strong CVU and MMU.

In the boys’ high school race, CVU’s Matthew Servin crushed the field with Thurston-like dominance, finishing 49 seconds ahead of teammate Jack Crum in second place. Indy Metcalf, in seventh overall, was the top finisher for the Harwood team, which took fourth behind CVU, MMU and Middlebury Union.

William Wallace kept the CVU hot streak going by winning the boys 2.5k middle school race. But Callan Mittler raised the flag for Harwood by winning the boys 2.5k junior varsity race in impressive fashion, 16 seconds ahead of second-place finisher Lucas Flinner of Middlebury. JV racers, of course, represent a hope for the future, so Mittler’s performance might have been a preliminary salvo fired by Harwood toward the CVU juggernaut. When Mittler makes the inevitable jump from JV to varsity, perhaps the next few years in Vermont high school cross-country racing will come to be known as the Age of Callan.