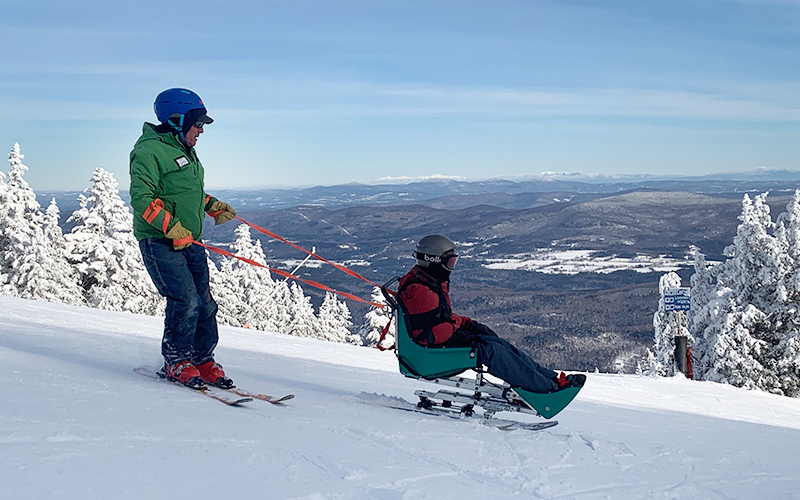 The Carpenter brothers have always “pulled each other into things,” whether that be dragon boat racing, gravel biking, pickleball or, now, volunteering for Vermont Adaptive Ski and Sports.

Tag Carpenter, 67 and a recent retiree, is in his first season as a volunteer for the inclusive winter sports program thanks partially to his older brother Chris Carpenter, 72, who has spent four years at the organization.

Vermont Adaptive Ski and Sports is a nationally-recognized organization that empowers people of all abilities through inclusive sports and recreational programming regardless of ability to pay. The organization provides programming in locations throughout Vermont and now has a new permanent facility at Sugarbush.

Tag was enticed by the new Vermont Adaptive facility and inspired by the Paralympic games.

“I got addicted to watching the Paralympic games on TV and I was seeing in videos and news clips that this facility was going up so I said, I gotta try,” he said.

The younger brother is happy he did and said he shared a touching moment he had with a young autistic woman after hitting the slopes.

She was nonverbal, so Tag struggled to gauge if the athlete was having a good time.

“It's hard to get a lot of feedback, but you kind of knew from looking at her and trying to make eye contact that she was having a good time,” Tag said. “But at the end when I did my final ‘how did things go?’ She looked at me and stuck her tongue out, and that was all I needed.”

Chris finds that working with the athletes has awakened a new part of him.

Many of the athletes love to sing during their chairlift rides and Chris joins right in.

“Sometimes it's the Rolling Stones, other times it's Twinkle Twinkle,” he said.

No matter the song, Chris sings along and enjoys every second of it.

“I’m 72 years old and it brings out a playful part of me,” he said as he prepared for his first run of the day.

Chris can be found every Tuesday morning at the Respite House, cooking and delivering breakfast to the residents.

“It’s an opportunity to spend really quality time with people,” he said.

The brothers also get to spend quality time together twice a week at Sugarbush.

“I tolerate the car ride up,” Chris said, prompting a hearty laugh from Tag. The older brother quickly added how fun the experience has been for the two of them.

“It’s actually fun. I didn’t see this coming and when he said he wanted to jump in this year I said ‘all the better’,” said Chris.

The siblings make a great duo on and off the mountain, at no surprise to them.

“We were good play buddies before Vermont Adaptive so I think we knew we would be a pretty good team, and he's a terrific mentor,” Tag said.

To learn more about Vermont Adaptive Ski & Sports and how to get involved, visit VermontAdaptive.org.

Blow is a student in UVM’s Vermont Community News Service.