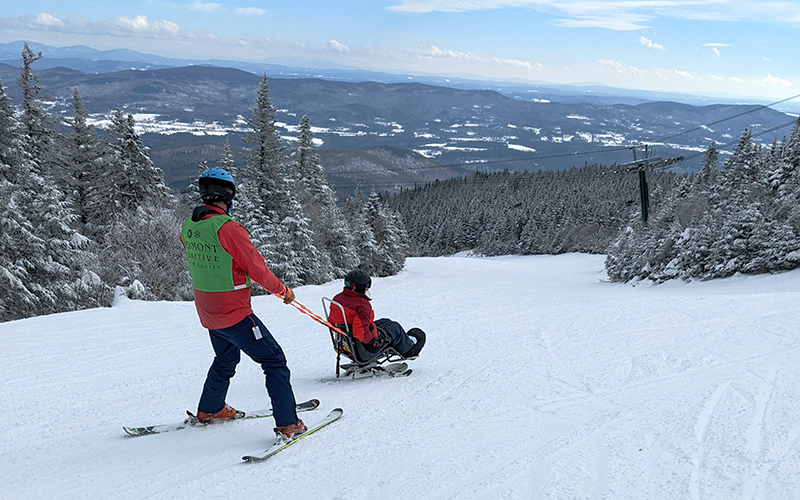 Jay Flickinger, Shelburne, loves to ski. He doesn’t let the fact that he uses a wheelchair slow him down. He’s been skiing with Vermont Adaptive Ski and Sports (VASS) for five years and is skilled in a sit ski. Last Friday morning, he got ready to hit the slopes in the new $2.7 million VASS facility at Sugarbush’s Mt. Ellen. His wife Cally helped him get his ski gear on while staffers adjusted his equipment inside. The new facility is ski-in, ski-out, so athletes can get ready indoors and go right out onto the snow.

“We can put athletes in their equipment inside and make all the adjustments to their equipment before they go outside. It’s been a gamechanger for sure,” VASS director of communications Kim Jackson said.

The previous space in the Mt. Ellen lodge, which had been there since the early 1990s, was 400 square feet. The new space is 10 times that size and includes areas for getting on and storing equipment, a quiet space complete with bean bag chairs and a fish tank, a kitchen for cooking meals, lockers, multiple handicap bathrooms, an elevator, a multipurpose room and a deck where families, friends and caregivers can watch their athletes ski and ride.

“It can get chaotic,” Jackson said. “If you just need a quiet space that room is huge to have that availability. Just having the extra space allows us to move easier. We can fit up when we’re inside getting ready to go outside. We can have more people, more volunteers,” she said.

The new facility, which can be accessed through the base lodge, opened in December and is the second such facility in the state. VASS is based out of Mt. Pico/Killington, in a $1.3 million space built in 2013. It is also working on opening a facility on the bike path on the waterfront in Burlington. On average, VASS leads approximately 3,000 outings throughout the state each year (one individual may do several outings). “We’ve definitely been way busier” in the new space, she said, despite cancellations due to COVID.

“This is phenomenal,” Jay Flickinger said. “The other room was like an obstacle course to get into and the door was narrow. You had to look around for a place to sit. All these windows, lots of room, brand-new bathrooms. You ski into the building; you don’t have to stop and take stuff off. It’s absolutely phenomenal.”

VASS serves athletes from ages 2 up to 90, Jackson said. “It’s a combination of folks who live locally and tourism. Now this building makes everything accessible in The Valley as far as recreation goes.” The facility will also be used for summer recreation. VASS leads paddling and mountain biking groups. “Now we’ll be able to be anchored here and go out to hike on the mountain in the summer, do some mountain biking and trail riding. I think we’re going to see a big growth on the summer end.”

Considerations for the new facility included calming lighting, soothing paint colors, comfortable spaces and room for equipment storage and adjustments. Jackson said VASS will be able to offer additional programming and activities in the new space, such as adaptive yoga, meditation and healthy cooking. VASS has also expanded its veterans’ program, which now has an office in the new facility. “There’s lots we’re going to be able to do,” she said.

“It’s easier for me to navigate the space and not be around everybody else in the lodge to try to work through to get to the adaptive facility” Cally Flickinger said. “I felt like I was always walking over people. There wasn’t a space to put your supplies, your clothing. It’s accessible, it’s really wonderful. The space is bright and cheery and there’s room for all of us.”

“It makes sports accessible,” Jackson said of the new space. “If you think about a family who lives down country and maybe has a child with a disability, now they have an anchored place to come, to ski together, and just have a vacation together and do everything as a family unit. We get a group of 20- or 30-somethings come up and maybe has someone who has a spinal injury or mobility issues. We can get them out on the slopes with their friends. It becomes this awesome vacation for people. I think this will really help to bring everybody here.”

“We’re so excited that so many people have made contributions to make this possible,” Cally Flickinger said. “It’s a great community. We’d be lost without them. They’ve been so supportive and willing to help. They’ve become friends.”

The Flickingers’ one-year-old dog Taffy joined them inside as Jay got ready, to the delight of athletes and volunteers alike. Taffy is training to become a therapy dog. “She’s really a great dog for Jay,” Cally said. “There is space in here for her. There’s a lot of space to walk around, which is wonderful. I don’t feel cramped or in anybody else’s way. Everybody has their own space. I think it works well.”

Once Jay had gotten his gear on and his equipment had been adjusted, instructor Andy Cook pushed him out the door onto the snow and he was ready to go. With Cook’s guidance, Jay carved wide turns in his sit ski, while two volunteers ‘blocked’ from behind, ensuring there was sufficient space between him and other skiers and riders. When the team stopped for a break mid-trail, Jay beamed and clapped. “It’s just the best,” he said with a big smile.