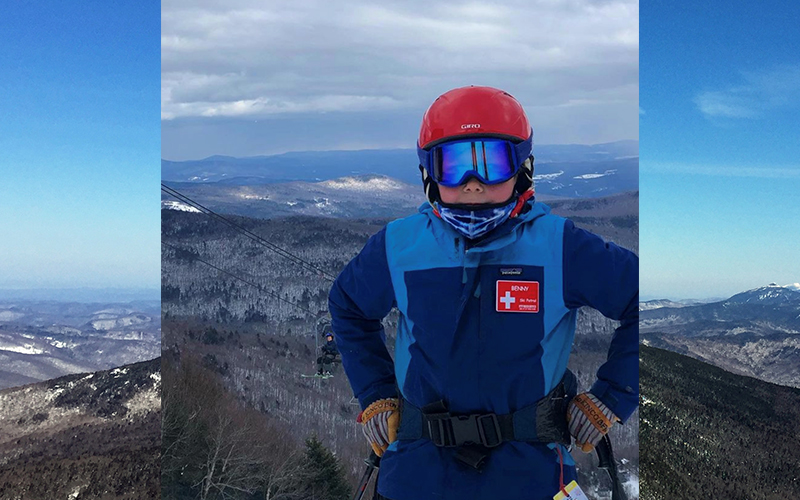 Mad River Glen is sending a big shout out to its “King of the Mountain” and youngest patrol candidate, Ben McCaffery. At 10 years old, McCaffery logged more vertical feet between opening day and February 12 than any other skier at Mad River Glen this season, staff included.

MRG reports that he has been dreaming of following in his father’s footsteps and becoming a ski patroller ever since he started skiing at 2 years old. Over the years he has earned his CPR certification, learned the mountain like the back of his hand and participates in trail sweeps at the end of every day. This season McCaffery was approved to carry a radio and belt pack with first aid supplies and help out where needed during the operating day. McCaffery and his family live in Thailand for most of the year, but due to COVID and delayed entry back into the country, their stay in Vermont was longer than expected this winter. This opened an opportunity for his father Tim to continue volunteer patrolling on a regular schedule and for Ben to join him during the day, thus racking up the daily runs and quickly gaining more vert than anyone else.

"And no, he’s not playing hooky all winter! He attends school online at night so that he can virtually be with the rest of the class in Thailand, which frees up all his days on Eastern Standard Time," explained Mad River Glen spokesperson Ry Young. Young reports that when McCaffery is older he plans to earn his National Ski Patrol certification, attend Harvard Business School and eventually return to MRG to become a Black Coat (paid patroller).

"In the meantime, he is enjoying pancakes in the Basebox, competing on his school’s swim team in Thailand, and looking forward to the next ski season! Congratulations on a great winter, Ben," Young added. Ben’s Stats (December 11, 2021 to February 12, 2022):